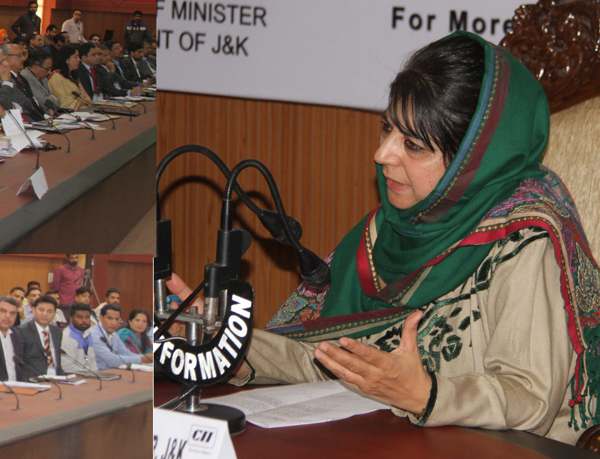 Asking the business community of the country to rise above corporate interests to help youth of the State become more and more employable, Chief Minister, Mehbooba Mufti today asserted that Jammu and Kashmir’s youth are much sharper and intelligent who just need a hand holding to prove their worth.

Addressing the Industry Talent Enabler Confluence-2016 here this evening, the Chief Minister appealed the corporate sector of the country to come forward and share their national responsibility of helping the youth of the State to hone their skills. She said the youth of the State are talented enough that given an opportunity they would prove their worth anywhere and in any field. “They just need a hand holding to show their talent“, she said.

Making a passionate appeal to the industry fraternity to involve more and more youth in their ventures, Mehbooba Mufti said, “by investing in the youth they would actually be investing in peace in the State.”

She reminded the audience of the feat eight year old Tajamul Islam from Bandipora attained by becoming the world Kickboxing champion. Similarly, she said another eight year boy from the State is going to represent India in judo at the international level.

Terming skill development as the future of employment, the Chief Minister said Jammu and Kashmir needs skilled workforce in huge numbers in coming years particularly in paramedics and engineering. She said five medical colleges and two AIIMS would be set up in the State and these institutes would be requiring besides doctors paramedics in huge numbers.

Similarly, with the starting of projects in road construction and power generation a good number of technicians and mechanics would be needed besides engineers, she said and asked the industry leaders to contribute their bit in skill development in the State.

Mehbooba Mufti said that Jammu and Kashmir has not attracted much of the attention of the corporate sector of the country adding that beginnings could be made even from small initiatives. She told the visiting industry representatives of many small initiatives taken by young boys and girls in the State which later became quite a success.

Terming youth as an asset for the State, the Chief Minister asked the delegates to deliberate how the positive energies in them could be channelized and how their aspirations could be met. This, she said, is a challenge and hoped that these initiatives would yield positive results.

Representatives from top bushiness houses of the country are attending the confluence.  The confluence is a first step to start a proper linkage between the J&K Government and the corporate industry of the country for the successful execution of the Himayat programme.

The Action Plan for the Himayat programme for three years proposes training of 1.25 million youth from the State, including 1000 foreign placements, and the resource allocation has been to the tune of Rs. 1600 crore.

During the meeting, the Chief Minister  heard the views, suggestions and opinions of industry representatives about enhancing the employability of the youth of the State.

Director, Skill Development in the Union Ministry of Rural Development, Anil Subramanian; representatives from prominent corporate houses of the country including Larsen & Tubro, Blue Star, V Mart Retail, ESSAR, VLCC and others besides officers of the State Government attended the confluence.