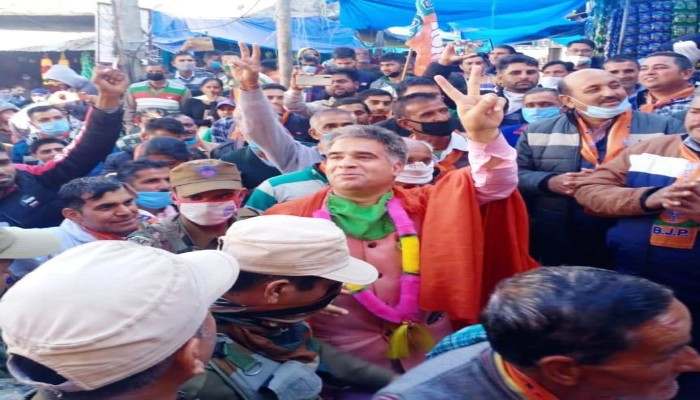 BJP J&K President Ravinder Raina sought support for the BJP candidates in DDC elections for the peace and progress in the region while he addressed massive election Rallies at Sundarbani in Rajouri.

Ravinder Raina, while addressing the massively attended election rallies said that people have built strong faith on Modi government’s policies and they trust the present dispensation beyond any doubt. He said that the public has established now that every step taken by the Prime Minister Narendra Modi led Union Government has very positive futuristic impact on the Nation and the society as well as the positive impact of those steps will be evident in near future as well. Raina said that the steps taken by Modi ji in last 6 years surpass all the initiatives collectively taken by previous Congress led Governments at the Centre.

Raina said that the decisive government at the Centre has given direct positive impact on the J&K in recent past. He said that from the tight curbs on the terrorists activities to the removal of unnecessary laws here will all boost up the development of the region and will surely progress the region on the path of growth as well as progress. He said that BJP policies have resulted in the zero tolerance against corruption, land grabbing, encroachments as well it promoted private sector and boosted industrial set up which will increase the employment ratio of the youth as well the per capita income of the J&K residents.

Ravinder Raina said that NC, PDP and Congress have only looted the J&K state. He said that now they have formed Gupkar gang in the J&K in connivance with Congress party. He urged the people to come together and show their power by decimating these anti-people parties in these DDC elections.

Raina said that by supporting and making sure the win of BJP candidates in these DDC elections the region will be pushed towards an era of peace and progress.