Surgical strikes’ sequel – An unbidden tale of Dolour and Disarray 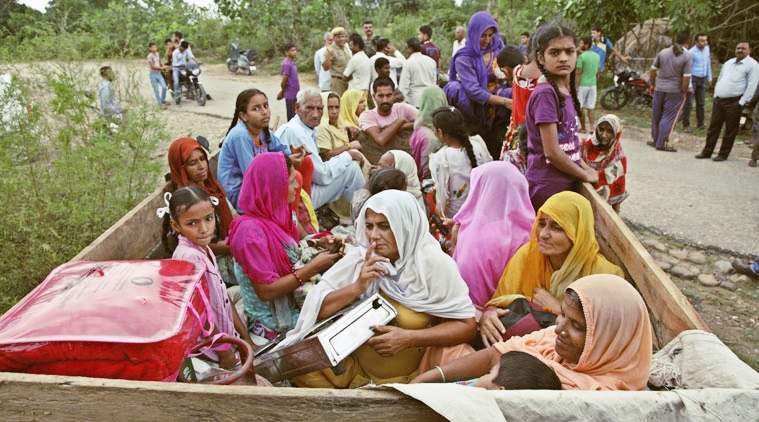 Matching the ecstatic vibes throughout the country, people in every nook and corner of villages along north-western front too are eulogizing the Narendra Modi government for a befitting response to terror incubators yet a sense of profound melancholia prevails. Unlike us, who are sitting in the comfort of our house and hailing the diplomatic and military forces, there are multiples who are left in the lurch in the wake of extant uncertainty.

Authorities were prompt in ordering evacuation in the villages located in 10-kilometre radius of the Pakistan border in the aftermath of surgical strikes on terror camps across the Line of Control (LOC), but abandoning one’s abode that too in such a haste is easier said than done! Evacuation does not imply merely relinquishing bricks and mortars, withal for such impoverished villagers it entails forswearing the lifetime of earning in building the house.

Ahead of the peak festive season, willingly or unwillingly, hundreds of families from various border areas along Samba, Arnia, Bisnah, RS Pura, Akhnoor, Palanwala have been shifted to ‘safer zones’. Vehicles, carts, two-wheelers, laden with women, children and elderly, sped away from vulnerable hamlets and the resultant displacement has already caused catastrophe for tens of thousands of villagers irrespective of occurrence of war.

Nevertheless, human beings can be moved, but what about crops and animals? Almost every village house has cattle, what sin have the innocent animals committed that they have been left alone to starve amidst the perpetual tension between humans? It seems, security and rehabilitation is the exclusive right of humans!

The catalogue of miseries does not exhaust here. Displacement doom has knocked villagers at the time when paddy is ready for harvest in the fields. Earnings through agriculture is the sole bread and butter for these people but alas they had to leave behind the crop which symbolized the only hope to pay back their loans and debts. A failed paddy harvest can wreck an unimaginable havoc for these strapped farmers.

Meanwhile, educational institutions across the pregnable belts have been closed down and the students remain out of touch with their studies and for how long nobody knows! Students hailing from such border areas already lag behind in terms of resources, opportunities and infrastructure and the displacement will only add fuel to the fire. Disturbance in their studies will make them trail even more in comparison to their urban counterparts and in the present era of cut-throat competition the vicious cycle of indigence, it appears, will keep on repeating.

The uprooted residents of these villages always bear the brunt of border tension and yet again they have deserted everything – their homes, cattle, crops, comfort, dreams and aspirations for their motherland.  Their supreme sacrifices need to be revered and the much needed support in all forms must be assured to them in this hour of need. Let us hope, pray and strive for normalcy to return so that our people can return to their homes and resume their normal lives as any victory will be meaningless if it comes after defeating own people! Let there be no more ruined lives or families left in shambles, whether the reason be terrorism or dislocation!