Suspension of Shri Amarnathji Yatra  for the second day 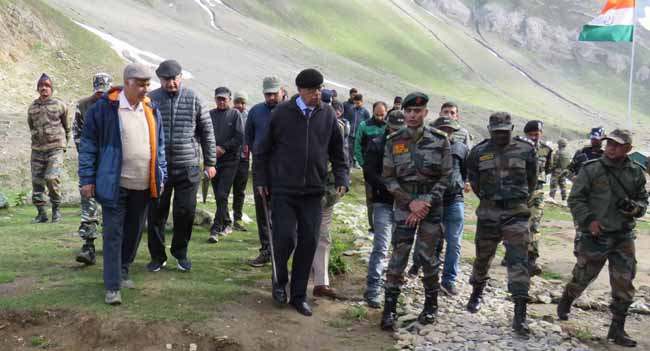 Yatra via both the Baltal as well as Pahalgam routes remained suspended for the second day because of landslides and shooting stones between Railpathri and Brarimarg, due to continuous rains in the Yatra area. However, limited helicopter services functioned on both the routes.

On the 8th day of the ongoing Shri Amarnathji Yatra, 7,450 Yatris paid obeisance and till date 68,202 Yatris had darshan of the Shivling at the Holy Cave.  In view of the incidence of falling stones, landslides and accumulation of Yatris at both the Base Camps, Nunwan and Baltal, CEO Shrine Board announced  the decision to halt the Yatra convoy due to arrive from Jammu tomorrow and advised Yatris to make their plans accordingly.

In view of the large number of Yatris who are held  up at Baltal, Nunwan, Sheshnag and Panjtarni Camps because of bad weather, falling stones etc Governor N.N. Vohra, Chairman of the Shrine Board shall be visiting these Camps tomorrow, cancelling his earlier scheduled visit to Jammu.