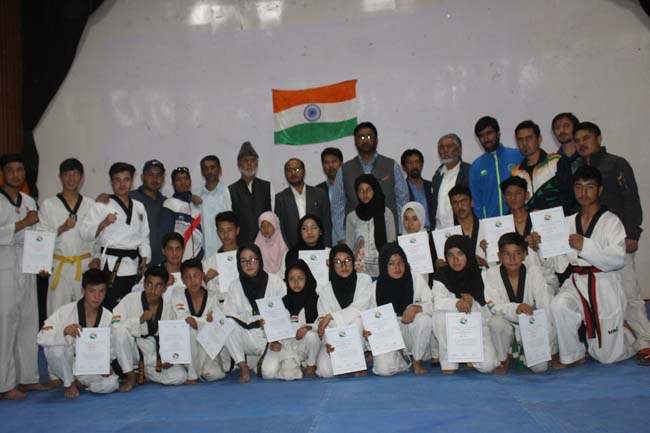 Taekwondo has emerged as the most liked game in Kargil which has given many national and international players like Ali Baghi and Tashi Tundup.

This was stated by the Chairman J&K Legislative Council, Haji Anayat Ali on the closing ceremony of 1st Advance Poomsae Training Camp at Syed Mehdi Memorial Auditorium Hall in Kargil.

Appreciating the efforts of Kargil Taekwondo Association, Haji Anayat Ali has assured all possible help for the association in future. He further said that the issue of creation of District Sports Council at Kargil, would be soon taken up with concerned authority and a meeting would be called in Srinagar which will be attended by all the stakeholders from Kargil as well as Sports Council Authority.

Haji Anayat Ali said that the both State as well as Center government is focused on the development of sports infrastructure at far-flung areas like Kargil. Very soon the Special Aria Games Center of Sports Authority of India will get adequate land to establish its hostel and infrastructure at Kargil under such initiative, he added.

He further assured the association all possible support to conduct National Open Taekwondo Championship at Kargil in the coming future.

Earlier Zaheer Abass, Treasurer J&K Taekwondo Association briefed the gathering about the history of Taekwondo in Kargil and its achievements.

The Players also presented demonstration on various aspects and techniques of Taekwondo and self defence techniques by Girl Players were displayed.

Later the Chairman distributed certificates to the participant’s players.