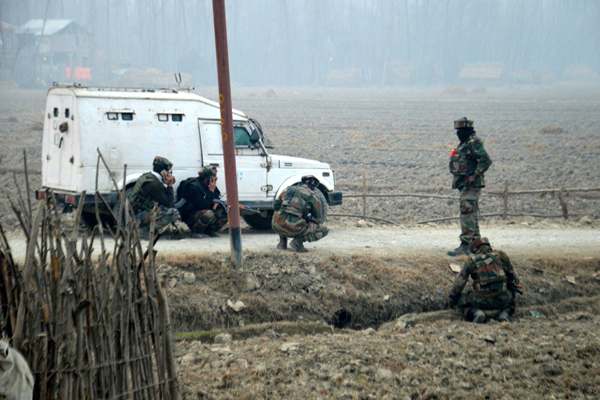 Three militants of Lashkar-e-Toiba (LET)  were killed in a fierce gun battle with security forces in Arwani area of Kulgam district in South Kashmir today.

According to reports the police and army carried out a joint operation and cordoned off the area of hiding of these militants in Arwani area last night. The cordon was thrown after the security forces were tipped about presence of group of LET militants in the area.

“Three Lashkar militants were gunned down in the encounter, while there was no loss on security forces side,” a senior police officer told JKNT.

The slain militants have been identified as Majid, Rahil and Waseem Khalid of Kulgam area.

Meanwhile, there are reports civilian protests having erupted in some  parts of South Kashmir after the killing of  militants. The security forces have bee instructed to abide by Standard Operating Procedure and utmost restrain in dealing with the protesters.

As news of the killings spread, clashes erupted between security forces and protesters who tried to march towards the gunfight site in Arwani village.

Clashes between stone-pelting protesters and security forces also erupted at various other places in south Kashmir.

Lashkar-e-Taiba commander Abu Dujana, one of the most wanted militants in the state, was earlier rumoured to be among the gunmen holed up in a house where the militants were holed up.

There were conflicting reports about Dujana. Locals said he escaped from the hideout in Arwani which lies close to Chief Minister Mehbooba Mufti’s ancestral Bijbehara town.

But security officials neither confirmed nor denied if he was among the militants trapped since Wednesday night.