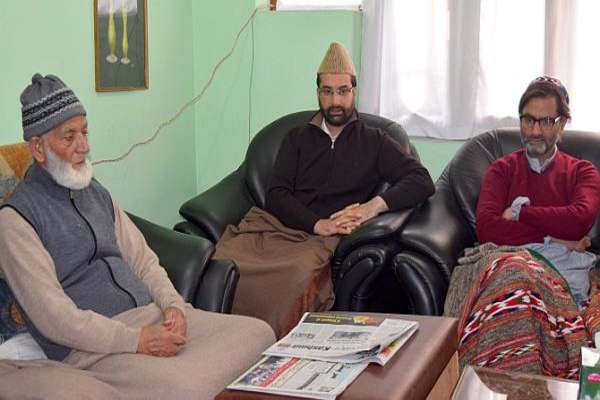 The Hurriyat Conference has emerged as the “ real government” in Kashmir, where its writ runs, while the elected  government is dependent upon the  separatists to wriggle it out of the  crisis in which it finds itself.

During all these five months of unrest in Kashmir, apparently a fall out of the killing of Hizb-ul-Mujahadeen Commander   Burhan Wani, the state government could not offer even a single word of  safety or free movement to the intending tourists.   Tourism is not just a money spinning economy for the Valley on which  at least one lakh families are  dependent directly or indirectly .

The moment  “ joint resistance leadership”  comprising  Syed Ali Shah Geelani,  Mirwaiz Umar Farooq  and  Mohammad Yasin Malik , announced  “ welcome for the tourists  and assured them of their safety, the Mehbooba Mufti government was all smiles , as if it had accomplished something that it had  been struggling  for long.

Indeed, there was an intense public pressure on Geelani and others  to exempt the  tourism industry from the violent cycle of shutdowns , which had become an excuse  for the miscreants to target any establishment that dared to open during the day time .The hotels, houseboats could not have operated, and taxis could not have been on road with stones flying in all directions .

There were some feeble voices urging the separatists to  think of inconvenience to public , especially the daily-wage earners , but  Geelani and others  were also facing a scenario where their own writ was under threat from  miscreants. The masked men would appear at Hyderpora residence of Geelani , and warn against any break in the shutdown . The usual threat was that they would hoist Indian tricolor on his residence, if he broke the cycle of the general strike .

On Tuesday,  when Geelani’s headquarters declared that Kashmiris would welcome, ensure  safety and safeguard the tourists and pilgrims, the separatist leadership told the tourism operators and the would be tourists  that who was in command in Kashmir. “ Is Syed Ali Shah Geelani running the government in Kashmir?” This question has been asked and affirmative answer it has got over the years  has confirmed that there was something amiss between the elected government and the people . Separatists were   getting into the  lead role  because of the agitations- 2008, 2010 and 2016 .

Whether tourists will revisit the Valley or not  would be known in the days to come, but the fact that has surfaced so firmly is that the political government  is subservient to the wishes of the separatists or whosoever is behind them .