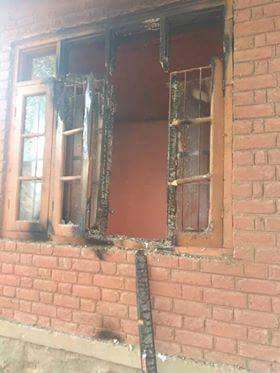 Reports said that some unknown persons attempted to set a panchayat ghar on fire in Nazeenpora village of the district on Monday evening at around 9:30 PM.

The panchayat house suffered partial damages in the fire before it was doused off. “The fire caused damage to windows and roof,” he said.

Similar incidents were reported from Drabgama village of Pulwama and Nagbal village of Tral town where minor damages were caused to two panchayat houses.

Police said damages were caused to windows of panchayat Ghar at Drabgama where some unknown persons attempted to set it on fire around 10:30 PM on Monday night.

“The fire was doused by locals residents, “villagers from Drabgama said. Police has taken cognizance in these incidents and started investigations.