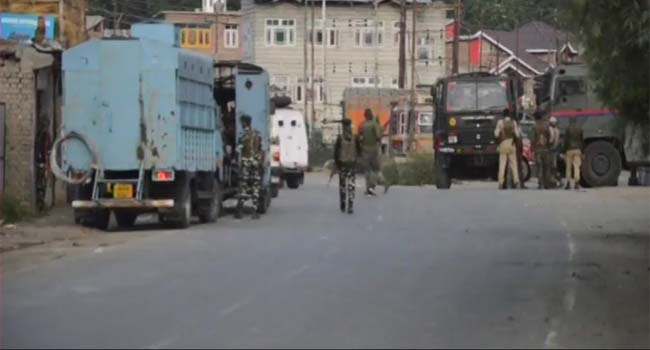 Two days after a police constable was kidnapped and killed in Jammu and Kashmir’s Kulgam district, security forces today gunned down three terrorists involved in the brutal incident.

According to reports, the encounter – which was launched on Sunday – took place two kilometers from the place where trainee constable was kidnapped and killed.

Terrorists group that tortured our colleague CT Mohd Saleem of Kulgam & killed him brutally are all trapped in an encounter with J&K Police/Army/CRPF in Khudwani Kulgam.

While confirming that all the three terrorists involved in killing of the trainee constable had been eliminated during the gunfight in Khudwani area of Kulgam district, states police chief S.P. Vaid said: “Three bodies of terrorists recovered so far from encounter site”.

Earlier, Vaid on his twitter page said: “Terrorists group that tortured our colleague Mohd Saleem of Kulgam and killed him brutally are all trapped in an encounter with J&K Police/Army/CRPF in Khudwani Kulgam.”

Security forces had surrounded Khudwani area of Kulgam district following information about the presence of terrorists.

Police said the hiding terrorists had opened fire on the security forces when the cordon around them was tightened after which an encounter had started.

Trainee constable, Muhammad Saleem Shah had been abducted from his home in Matulhama village of the district on Friday evening.

The bullet riddled body of the constable was found on Saturday in Qaimoh area of the same district.

The trainee constable had come home on leave from Kathua Police Training School.