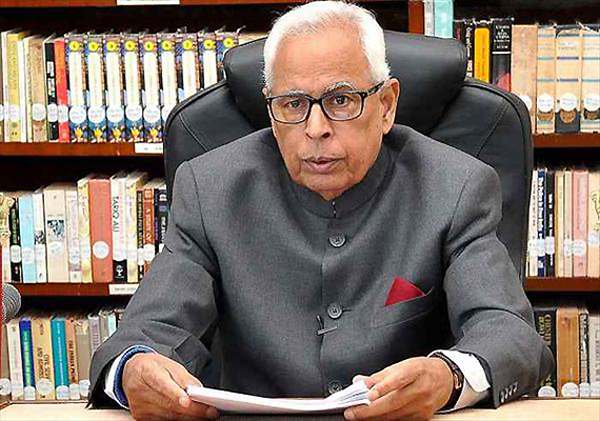 Governor N.N Vohra has reviewed the preparedness of the Administration for rescue and relief measures to be taken for meeting the eventuality of a flood situation in the State. Chief Secretary Sh. BVR Subrahmanyam informed Governor about the advance measures taken by the Department of Disaster Management, Relief, Rehabilitation & Reconstruction (DMRRR) in the past more than one month for ensuring the lives and properties of people in the event of a flood.

Governor was informed that during the recent flood like situation, during 28th June -7th July, 2018, the Central Flood Control Room was set up at Ram Munshibagh; Automatic Water Level Recorders and Automatic Rain Gauges were installed at five essential sites viz. Sangam, Ram Munshibagh, Khudwani, Batkoot and Wachi; Global Navigation Satellite System is being used for correlating the manual and automatic Gauge sites with each other; Doppler Radar  and Automatic Weather/Rain Gauge stations have been put in place  to gain real time data in advance, during any adverse situation; 12.60 lacs empty cement bags are available with Irrigation & Flood Control Department (I&FC), besides geobags and mega bags; encroachments were removed from the Jhelum Spill Channel and tributaries; dredging of river Jhelum and flood spill channel has been initiated; with World Bank support, River Morphology Study of Jhelum and Tawi has been initiated for better flood forecasting.

Governor was further informed that the Department had established an State EOC Centre at Gogo Humhama and 260 tents have been pitched with other facilities; 40 Relief Camps established in district Srinagar and 7 Nodal Officers appointed; 7 teams of SDRF and two teams of NDRF, along with 14 motorized boats, positioned; 100 personnel of Home Guards and Civil Defence, besides 2,500 Police personnel and 3,000 CRPF, kept ready for assisting evacuation operations; 260 family tents pitched; 30 toilets (male and female) erected; medical teams deployed, alongwith medicines and chlorine tablets.

Governor was also informed that the Department of DMRRR has operationalized three EOCs in District Budgam, Srinagar and Pulwama and the remaining 19 Districts are being made functional by 15th August 2018 in the office complexes of the District Development Commissioners, for which Rs.15.00 lac per EOC has been proposed for setting up of these EOCs and Rs.75.00 lac has been proposed for setting up of two State EOCs, one each at Humhama Gogo Srinagar and at Gandhi Nagar Jammu. Besides, procurement of communication equipments and refurbishment of existing spaces is also being done in the offices of Deputy Commissioners /State level EOCs.

Regarding strengthening and raising the embankments of the river, Governor was informed that 113 spots on river Jhelum have been identified and strengthened during monitoring by Beat and Sectoral Officers; 140 spots on tributaries have been temporarily restored and strengthened; strengthening of 25 spots on river Jhelum and 68 spots on tributaries are under progress. The protection bunds have also been constructed at vulnerable spots in Paragwal and Akhnoor areas. Chief Secretary further informed that about 1.75 lac bags have been filled with sand/earth and kept ready by the department at various spots close to the bunds, where flood threat was earlier observed. Besides, 81 permanent dewatering stations and 119 mobile pumping units are available at the district and divisional level. 04 additional pumping units are required at district level in Kashmir Division which will be procured.

After discussions, Governor complimented Chief Secretary over the preparatory work done and directed that Secretaries of I&FC and DMRRR should take immediate action to fill up any identified additional gaps to avert/ tackle arising incidents during heavy rainfall and ensuing flood like situation in future. Chief Secretary informed that sufficient funds have been kept at the disposal of Divisional Commissioners and Deputy Commissioners have been directed to ensure prompt disbursement of ex-gratia relief, as per the norms, when need arises.