Traffic suspended on Srinagar-Jammu highway due to landslide 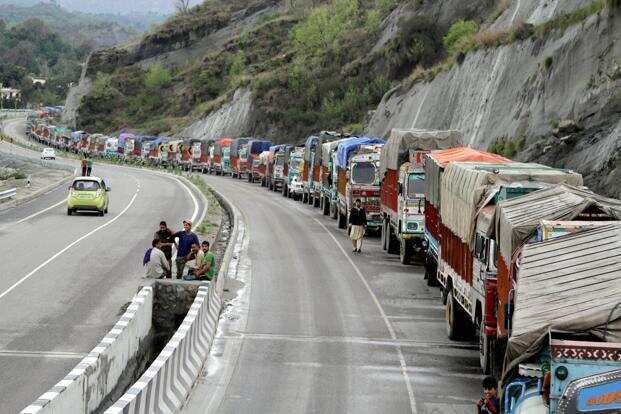 Traffic on 270-km-long Srinagar-Jammu national highway, the only all weather road connecting Kashmir valley with the rest of the country, was suspended on Tuesday due to fresh landslides in Ramban area, official sources said.

Hundreds of vehicles, including those carrying passengers are stranded on the highway, sources said.

There was a huge landslide at Mahar Ramban today disrupting traffic movement on the highway. Hundreds of vehicles were stranded on both sides of the Mahar, they said, adding that the National Highway Authority of India (NHAI) has put into service sophisticated machines and men to put through the highway.

Work to clear the landslides on the road was going on and it will take few hours to resume traffic provided there are not landslides and shooting stones, sources said.

A traffic police official said that today Light Motor Vehicle (LMV) traffic was allowed from Srinagar and Jammu. However, Kashmir bound vehicles had to cross Nagrota between 0800 hrs to 1300 hrs and Jakheni Udhampur from 0900 hrs to 1400 hrs.

For Jammu bound LMVs they had to cross Zig Qazigund between 0700 hrs and 1200 hrs.

However, Heavy Motor Vehicles (HMVs) will be allowed to ply from Jakheni Udhampur from 1500 hrs 2200 hrs, he said adding no vehicle will be allowed after cut off timing.

Security forces are advised not to ply against traffic plan in view of congestion on the highway, he said adding they are advised to ply from Srinagar to Jammu.

The historic 86-km-long Mughal road, linking Shopian in south Kashmir with Rajouri and Poonch in Jammu also remained closed since December last year due to accumulation of snow. However, people living on both sides of the road, which is see as alternative to Srinagar-Jammu highway, alleged that snow clearance operation has been completed early this month. They further alleged that authorities are not allowing traffic officially though some private vehicles are plying on the road.