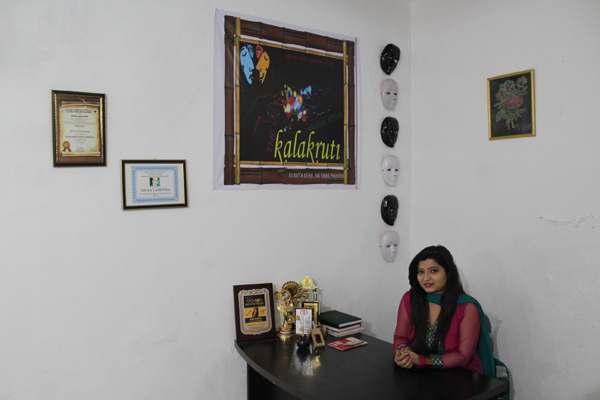 The leading theatre personality of Jammu and Kashmir, Neha Lahotra, commonly known as “Tragedy Queen” of theatre in Jammu wants to pass on the baton to next generation so that people are ready to take over her place whenever it is available.

With this thing in her mind, Neha has opened a small theatre institute in Jammu where new faces are learning the art from her and are also working on upcoming projects.

In a tête-à-tête with JK News Today, Neha opened up about her entry into the theatre and her upcoming projects. Her first performance on stage was at the age of 4 when she was studying in Lower Kindergarten and acted in a play during Annual day function of her school. During the school and college days she performed at different levels but her first performance as a professional actor came in 2007 when she worked in a film and also got a chance to work in theatre with leading cultural group of Jammu, Shivani Cultural Society.

“After working for over nine years in theatre, I have opened a small theatre institute ‘Kala Kruti’ where fresher students and even employees are coming to learn the art. I know time will come when I will not get main roles and will have to work in secondary roles. At that point of time, there should be somebody to take over the role from Neha Lahotra. This institute is aimed at harnessing the talent and passing on the baton to new generation,” Neha Lahotra said.

Neha’s career in theatre started in 2007 and since then she earned lot of fame and won best actress award in state theatre festival also.

“Theatre is my hobby and I have earned the fame from this since I seriously started taking part in the year 2007. Since then I have worked in 25 to 30 plays and 150 to 200 commercial serials, advertisements, and songs,” Neha said.

“But for me my best performance was in Damini play, which was based on the tragic incident of 2012 Delhi rape and murder case. This earned me applause not only in Jammu and Kashmir, but in Delhi, Mumbai and other cities of the country. People there know me through this role,” she added.

Her first performance on television was a Dogri serial Kunjlu Chanchlo which has been telecasted more than 25 times on Doordarshan Jammu channel. “Though not many people watch Doordarshan in Jammu city but whenever I move to rural areas, people recognize me as Kunjlu Chanchlo. Besides, theatre has given me the confidence to stand in front of people and interact with them. Whatever fame I have earned is all because of theatre,” the 27-year-old actress said.

She has also worked in Saavdhan India series, based on real life events, telecasted on Life Ok entertainment channel.

Apart from Jammu, she has performed in Chandigarh also and now her group is planning to move to New Delhi in near future. But at the same time she feels that theatre in Jammu is not much famous.

“It is fact that very few people like theatre in Jammu but I would like to share one thing that after my performance in Pichasyatra play, many people on Facebook told me that if they will have to decide between watching a movie in theatre and her play, they will watch my play. People love theater but they want exemplary performance,” Neha said.

Cloud Burst in Dachhan, many missing