“Urban renaissance is happening in Jammu and Kashmir”, says the LG 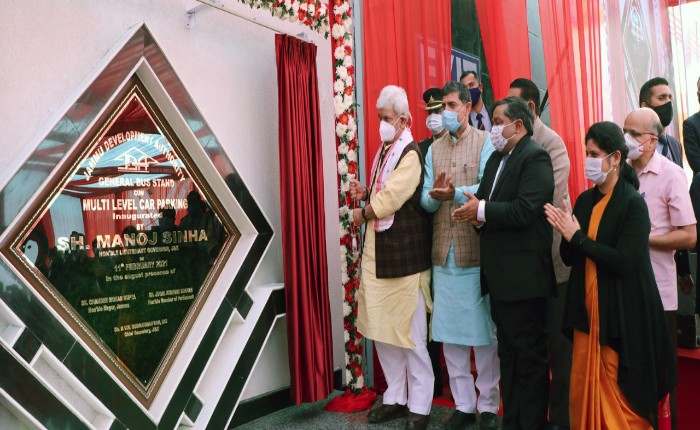 Terms the opening of new facility as a step towards comprehensive development of physical, social & basic infrastructure

· More similar parkings will be dedicated to Jammu soon

Constructed by Jammu Development Authority (JDA), the new facility has built-up area of around 60,064 sqm, having a parking capacity of 80 Buses in bus terminal, 1312 cars, 177 two wheelers and 239 commercial shops, besides dedicated space for restaurants and food courts.

“If I want to define the work that has been going on in the cities of Jammu and Kashmir for the last few months, I would say that Urban Renaissance is happening now”, the Lt Governor remarked.

He extended his gratitude to the officials of Jammu Development Authority (JDA), engineers, artisans and labour force associated with the project. It is a matter of great pride that the diligence and hard work put in for the completion of the mega project has finally become a reality, he added.

More similar parkings will be constructed in Jammu soon. Whether it is the Sewerage Treatment Plant, Rain Water Harvesting Mechanism, it has been taken care of that the scaling up of change and strategy is for long term effect, he added.

Jammu is such a beautiful city that you will be fascinated at its sight. It has also emerged as a large commercial hub in the last few years and economic activity has increased further. Therefore, there was a need to develop the existing road facilities and parking facilities, said the Lt Governor.

“I am working on two main objectives – Sustainable Development and making Jammu city Self-Reliant. And I want to tell all the citizens of Jammu with great responsibility that I will leave no stone unturned in improving transparency, accountability and service delivery to you”, added the Lt Governor.

Recalling his meeting with the officials of Smart City Ahmedabad Development Limited on Jammu Smart City Project, the Lt Governor said that to develop Jammu as Smart City, Smart Urban Mobility and Efficient Traffic Management infrastructure is also being kept as one of the major components of the project.

The Lt Governor observed that with the excellent Multi Level Parking, the facilities are being extended to more areas covering most of the city. On the same lines, the facility is being built in Panjtirthi which will be completed by March next year.

In the coming days, we are also going to do an IT-based Smart Parking System in Jammu city. With this, around 33 major routes in the city will be developed to facilitate vehicular parking so that traffic jams do not occur, traffic goes smoothly and there is ease of movement for all, the Lt Governor maintained. Due care will also be taken about the movement of pedestrians and bicycles, he added.

The Lt Governor observed that committed efforts are being made to rejuvenate and develop the areas from Mubarak Mandi to Tawi RiverFront, besides other areas like Moti Bazar Road and Raghunath Bazar, Apsara Road, Gole Market, Canal Road, Trikuta Nagar, Dogra Chowk, KC Chowk etc. We have not only made plans, but have started working on them. The entire Jammu city will be rejuvenated, he added.

On the grand festival of India’s 75th Independence Day, state-of-the-art conservation and restoration process of Mubarak Mandi in Jammu and Shergarhi in Kashmir would be completed, the Lt Governor maintained.

Soon, the Metro Rail will also run here. We also reviewed the Tawi River Front Project which was pending for many years, and have given necessary instructions to execute it at the earliest. The team of senior officers has visited Ahmedabad to get first-hand information on the Sabarmati River Front, on whose lines it would be developed. We are also roping in the experts of Ecologically Sustainable Development, so that work on the ground can be completed at a rapid pace. Surveys are being done for the beautification of the major markets of Jammu, the Lt Governor observed.

For the first time in the history of Jammu and Kashmir, a very large and elaborate Industrial Scheme has come up. Along with ambitious investment and economic development, the work on development of energy and green areas, urban planning, biodiversity, air quality, water management and waste management in Jammu City has been expedited.

Therefore, along with development, a feeling of mutual love and sense of belongingness also needs to be developed. There should be a strong feeling that this is my city, he added.

Jammu is being identified as the ‘City of Temples’. It is the identity of the city, said the Lt Governor and called for active citizens’ participation to keep this identity alive.

“If anyone asks me about the city of Jammu, I will say, the “City of Bliss, or the Eternally Spiritual City on Earth”, the Lt Governor concluded.

In his address, Chander Mohan Gupta, Mayor, Jammu Municipal Corporation, recounted the measures being initiated for development of Jammu city and making it more citizen friendly.

Dheeraj Gupta, Principal Secretary to the Government, Housing and Urban Development Department during his welcome address, threw light on the major development projects going on in Jammu City.

A video presentation was also made giving a detailed briefing about the mega project. Vote of Thanks was delivered by Babila Rakwal, Vice Chairperson, JDA.