The body of the BJP veteran has been kept at his official residence — 6 A Krishna Menon Marg. Shah said people can pay homage to the departed leader at his residence from 7.30am to 8.30am on Friday.

The body would then be taken to the BJP headquarters at Deen Dayal Upadhyay Marg at around 9am, he told reporters outside the late leader’s residence.

Here are the live updates:

#Delhi: The mortal remains of former PM #AtalBihariVajpayee have been brought to BJP Headquarters pic.twitter.com/ujL8ZmYn6a

A moment caught in time: A heart-melting picture of Vajpayee in his early days This picture of the late former PM was posted yesterday by Rajasthan Chief Minister Vasundhara Raje.

The Delhi High Court as well as all district courts are to function till 1 pm today. A half-day holiday has been announced today to allow officials and staff to attend the funeral of former PM Atal Bihari Vajpayee. 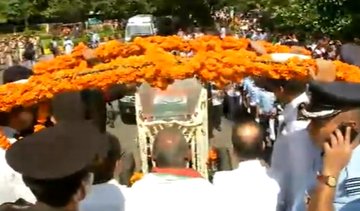 Delhi: The mortal remains of former Prime Minister #AtalBihariVajpayee are being taken to BJP Headquarters.

Police put restrictions on several roads in Delhi to ensure a smooth movement of the traffic and has advised citizens to take alternate routes to avoid snarls as they expect thousands of mourners to reach central Delhi to pay homage to Atal Bihari Vajpayee.

PM Modi has arrived at the BJP headquarters at Deen Dayal Upadhyay Marg where the mortal remains of the former PM will be placed. The funeral procession would leave the BJP headquarters at 1pm and the last rites would be performed at 4pm, he said. Over 5,000 policemen and paramilitary personnel will form a multi-layer security cordon for a smooth passage of the funeral procession to the Rashtriya Smriti Sthal, the Delhi Police said.

Prime Minister Narendra Modi today posted a blog on his Twitter account remembering Atal Bihari Vajpayee as a “person with a gifted spirit, heart and mind and the rarest of human beings who touched the heart of every person he met”.

A leader for the ages, he was ahead of the times.

Penned some thoughts on Atal Ji, which have also appeared across various newspapers today. http://nm-4.com/lns6

A leader for the ages, he was ahead of the times

In times of turbulence and disruption, a nation is blessed to have a leader who rises to become its moral compass and guiding spirit, providing vision, cohesion and direction to his people. And, in

Hours after the announcement of former PM Atal Bihari Vajpayee’s death, officials from the North Delhi Municipal Corporation received the first set of directions — to arrange sandalwood and sweep the route from the BJP headquarters to the Rashtriya Smriti Sthal, where the last rites of the former PM would be held. Officials said the former PM’s mortal remains would be taken to the BJP headquarters at Pandit Deen Dayal Upadhyay Marg around noon. Delhi BJP leaders have said around 50,000-60,000 party members would be present at the party headquarters. Expecting around 1-2 lakh people assembling to pay homage at both locations, civic authorities have asked employees to clean the entire route between the BJP headquarters in central Delhi to Rashtriya Smriti Sthal in north Delhi

Preparations are underway at Atal Bihari Vajpyaee’s residence to take his body to BJP headquarters at Deen Dayal Upadhyay Marg.

Trucks which will be a part of the convoy in which former PM #AtalBihariVajpayee‘s mortal remains will be taken to Bharatiya Janata Party (BJP) headquarters & for funeral. #Delhi

A dedicated Swayamsevak and a giant politician with exceptional oratory skills who ruled over the hearts of countless Indians. Your memories will always continue to inspire us.http://rss.org//Encyc/2018/8/17/Shradhanjali-Atal-ji.html …pic.twitter.com/nb87zTSZ1v

US joins world in paying tributes to Atal Bihari Vajpayee

The United States joined the world in paying tributes to late Prime Minister Atal Bihari Vajpayee, saying he was among those who “recognized early that India and the US could develop a partnership” for the benefit of the region and the world. “Standing before the United States Congress in 2000, he famously characterized U.S.-India ties as a ‘natural partnership of shared endeavors’,” US secretary of state Mike Pompeo said in a statement. 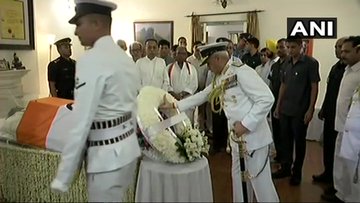 Railway exams to be held as scheduled

The Indian Railways has announced that the Railway Recruitment Board (RRB) exams scheduled for Friday for the post of assistant loco pilots and technicians will go ahead as per schedule across India except for flood-hit Kerala.

It will be ensured there is no compromise with security: Delhi DCP Madhur Verma

Delhi police has made elaborate security arrangements for the last rites procession. It will be ensured that the people who come to pay last respect & the commuters face minimum inconvenience & that there is no compromise with security: Delhi DCP Madhur Verma Javed Akhtar and Shabana Azmi at the former PM’s residence

Javed Akhtar & Shabana Azmi arrive at former PM #AtalBihariVajpayee‘s residence to pay last respects. Javed Akhtar says,’very rare that a politician is respected across party lines. People with different ideology have also come as they love him because he used to love all’ #Delhi

The Delhi Police has issued a traffic advisory for the national capital. Almost all roads leading to central Delhi including Krishna Memon Marg, Akbar Road, Janpath and India Gate C-Hexagon, among others, will remain closed from 8 a.m. onwards for the general public today in order to ensure smooth vehicular movement during Vajpayee’s final journey.

Heavy security arrangements have been made around 6-A Krishna Menon Marg, the former PM’s official residence. These include deployment of police, traffic and paramilitary personnel.

Hundreds queue up outside Vajpayee’s residence

Hundreds of people queued up outside the residence of Atal Bihari Vajpayee to pay their last respects to the departed leader. The gates of his official residence was thrown open at 7:30am for public.

Government offices and educational institutes in several states including Delhi will be closed on Friday as a mark of respect for former Prime Minister Atal Bihari Vajpayee, who died in Delhi on Thursday after a long illness.

Traffic movement is set to be restricted across central Delhi for former prime minister Atal Bihari Vajpayee’s funeral. Lakhs of mourners are expected to reach central Delhi to pay homage to him.