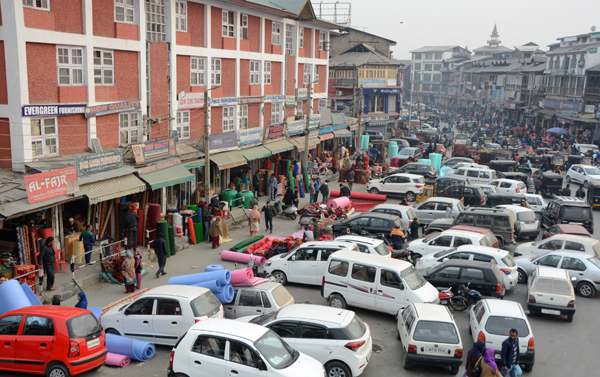 Day life came alive in the Kashmir Valley on Saturday  first time  after nearly five months of protests and shutdowns  as the separatists have announced  24×7  relaxation for  this weekend.

This relaxation will be there for Sunday as well, as per the calendar issued by the separatist leaders last Wednesday. It is for the first time that the separatists have  given full-time relaxation for two days, November 19 and 20 .

This is in a sharp contrast to their rigid and no-relaxation   on Eid-ul-Zuha  in  September .

Markets were abuzz and the public transport raced up and down across the  Valley without  any fear of being stoned or torched by the stone throwing groups of youth who had taken upon them to  implement the  shutdown calendar since July 8, when a militant leader Burhan Wani was killed in an encounter.

“ I have opened my shop for the first time, in five months,  and I do hope that the day relaxation period would become a norm ,” Shabir Ahmad , a  shopkeeper in   Nowhatta  in Srinagar downtown told JKNEWS TODAY (jknewstoday.com). He was pleased with the turn of events  as t his  stood as a pleasant change  to the gruesome  scenes of stone throwing  and pellet guns  sending  children to hospitals in  ambulances making their way with wailing sirens. “ That was  a  spine chilling scene,”  Shabir recalled with a shudder in the freezing cold of morning on Saturday.

It seemed that every one was out on streets  as if nothing had happened in the past over four months, when torching of vehicles and omnipresent stone throwers and  menacing crowd of youth enforcing shutdown had taken control of streets. “ There was all pervasive fear. Today it looks different,” recalled  Shamima, a young girl  who was  made to retreat to her home in  Saraibala locality a number of times whenever she ventured out to go to her work place .

The signs of normal life had started appearing in Kashmir for the past few days, but there never was a  complete sense of normalcy  or ease.  Kashmiris were caught between the fear of the strike enforcers and their sentiment . This was a strange mix of  trauma and  “  hope to see something emerging out of their struggle.”  “ All of us are hopeful that something would be achieved, our sacrifices won’t go waste,” said  Ghulam Hassan  Tantray. “ Observing strike for more than 130 days in itself conveys so many messages, and it is for  the government to decode all the  feelings- hidden and articulated ones.”