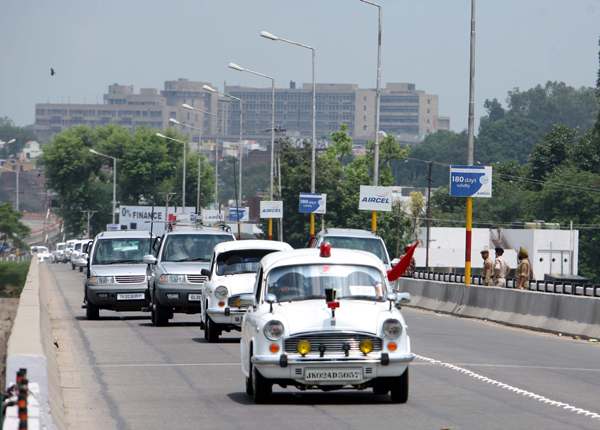 Ours is a land of phenomenal paradoxes. We are a country where public servants seek to be served by the people whom they had in fact pledged to serve. More so, the personage of such cadre are legitimately recognized as “Very Important Persons” (VIPs) and those for whose ministrations they are appointed are looked down upon!  We fail to provide a square meal for a day to millions but we can any day shell out millions at the opulent VIP culture.

VIP culture is the assumption that individuals are hierarchically ordered and the ones lower down must bow down to the ones above. What a gross violation of constitutional right to equality! Nevertheless, India boasts about having the largest brigade of such ‘cardinals’. The importance of these extremely important persons can be judged from the fact that they deem themselves even above the law of land! Why else will they throw their weight around by bragging about their concocted and fabricated VIP status?

As per the rules, nineteen categories of dignitaries are permitted red beacons with flasher, twenty-one with red lights sans flasher and four local grades with amber beacon. No bureaucrat barring the Cabinet Secretary or the State Chief Secretary and no defence officer except the chiefs or acting chiefs can display red lights. However, elected officials, bureaucrats, high ranking police and military officers all wave flags and flash ‘laal battis’ in a race of repute.

Moreover, as per guidelines issued by the Ministry of Home Affairs, traffic can be stopped only for the President of India, the Vice President of India, the Prime Minister of India and visiting foreign dignitaries who are given President and PM level security cover. Perhaps the above mentioned luminaries are omnipresent and hence stoppage of traffic at each state, each junction, throughout the state and country at large is an everyday phenomena! 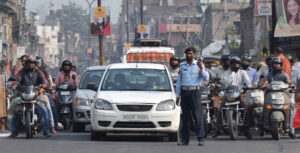 These self acclaimed VVIPs are provided convenience after snatching the same from the ‘not so important’ citizens of the nation! The misuse of state machinery to get roads blocked in order to get priority passage, deploying gunmen and directing them to act like goons by brandishing weapons and intimidating people to step aside so to make way for a white ambassador car with a flashing red light and screeching siren has become a status symbol of VIP power. The babus surely are in a tearing hurry to get to somewhere really urgent whenever they leave their abodes even if there is neither any life threatening situation nor any medical emergency. They zip past the red lights as if it is the last second to catch some flight, but even that they are not able to do just right!

We often read about delayed flights and de-boarding of passengers to accommodate VIPs. Some incredible VIPs have even been reported to arrive last minute at the airport with expired passports and then taking leisure time to get the new passports delivered, meanwhile people helplessly wait for hours for all this unimportant exercise of important people to get over! The roads would have been blocked two more times while the entourage went to and fro for getting the correct passports of our honourable VIPs and again some more students would have missed their examination deadlines, more commuters would have been unable to make to their flights or trains and even more would have missed critical appointments like job interviews! After all, the nation is at the service of VIPs and only their time matters! 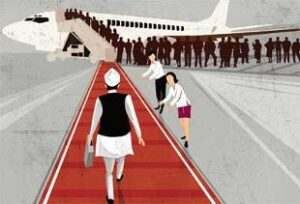 What’s more, the passage of VVIP/VIP  takes priority over the lives of common folks. The cavalcade of these netas have blocked ambulances at several instances when each second ticked by is extremely precious for the patients. As a result there are many whose lives have been held hostage and many who lost their lives. In our country, it is all right to not give way to an ambulance but we must give way to a VIP come what may!

While on the subject, who knows if this zippy VIP fleet which costs many their lives and careers is indeed going for an official assignment or being utilized by family members for their shopping spree? “It is sad that official vehicles are not utilized for official assignments. Ambassadors with read beacons atop as well as army and police jeeps are taken on personal rides thus wasting state resources may it be material or human”, says Mr. Suresh, a resident of Satwari. “VIP cars are increasingly being used for shopping by ladies. I often see 4-5 Jawans accompanying women while they come for shopping and it pains me to see them opening and holding the door for these ladies who are out on personal pursuits. At other times, the commandoes are delegated menial job of doing rounds for collecting dresses and groceries”  says Amrita Raj, a resident of Gandhi Nagar.

Forget about cars, The VIPs do not hesitate from using even planes for personal motives! We are a country where a VIP’s one member of the family blatantly demands bigger aircraft to accommodate family members in the business class and is gleefully provided the same while the other member cancels a flight and turns it into a chartered flight so as to fly with some cricket players for a match! Even in railways, misuse of emergency quotas for reservations is a regular practice and those who actually need this quota are left in the lurch.

Our VIPs seek special treatment not only on the road, rail or aircrafts but in school admissions, in business deals, jails and even in temples. While the general public waits in long queues for hours, the VIP’s get special passes and entry through special gates. It appears that VIPs are important even in the eyes of God and they have the foremost right on God and all the religious practices! They can apply brakes in the middle of road and their guards can anytime quarantine the area from us ‘no-bodies’! The people in question are the same people who in fact hold a higher duty to uphold the law to set an example for the public!

Never mind if their convenience is possible only by causing inconvenience to the general masses or delivered at huge cost of the same taxpayers as the VIPs are the modern day upper class Brahmins and commoners are equivalent to untouchables for this elite class! Perhaps due to similar reason an exclusive smooth, tarred road was recently introduced for VIPs in one part of the country, parallel to the potholed track for ordinary Indians. The VIP culture has become so overpowering that neither do these people refrain from treating common people with contempt nor do they exercise refrain while getting their sandal straps tied by security officers!

VIPs are entitled to special treatment in every nook and corner of the country. Nothing in India is immune from the VIP effect. They have a legion of already scarce security personnel while the ratio for ordinary citizens to police protection is an appalling 700:1. Assuredly, the lives of the common people have zero value in front of that of VIPs!

But why is it so? Are these people here to serve or be served? Are we living in a democratic country democracy? If so, is democracy about hierarchy in civil life where chosen ones are given excessively preferential treatment? Domineering approach of power-drunk VIPs at the expense of public interest mocks at the democracy of India.

On the contrary, in other democracies equality before the law governs the conduct of public servants. All over the world, beacons are permissible only on vehicles travelling on emergency duties and blowing of sirens is strictly prohibited, unless in cases of extremity. But, for us, it a common sight which not only happens every day but several times throughout the day. Our VIPs surely need take a lesson or two from the Presidents and Prime Ministers of other countries who act as common men while travelling in public places and patiently wait for ambulances to pass first.

It seems the time of British Raj is still not over for Indians as they continue to be exploited even today with the only difference that at that time the exploiters were outsiders whereas now they are our ‘own’ people who are working against us.

It is high time we stop to stoop in front of this boorish VIP culture that has become nation’s vulture. These “Very Important Persons” will cease to be important when we discontinue to give them that importance. Equality is our elemental right and we shall have it!