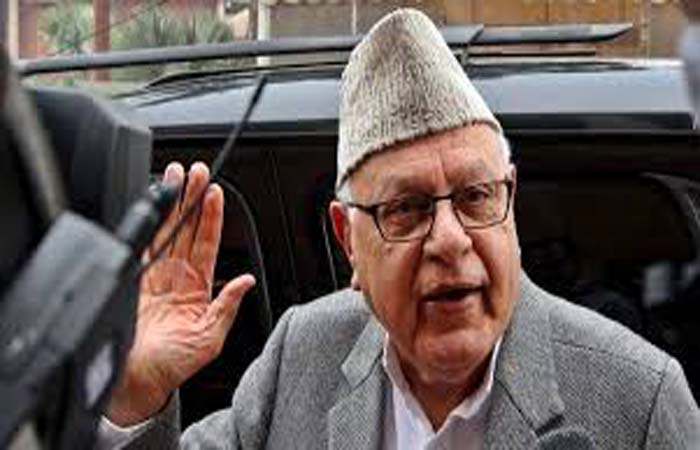 National Conference president Farooq Abdullah on Tuesday lashed out at those calling him and others as “ anti-nationals.”

“ We are as much part of India and Indians as anyone else living in this country. We have never raised slogan against the country nor will ever,” he said while criticising BJP, that, he said , has arrogated right to define who is Indian or not. “ This country belongs to us all.”

Farooq Abdullah was addressing a day- long convention of Central Zone of Jammu . He said speaking and fighting for our rights- restoration of special status – is not anti-national.

Expressing optimism about restoration of special status under Article 370 to Jammu and Kashmir, National Conference President said the people are resolute enough and steadfast in their resolve to stand for their rights.

“We will fight for our rights peacefully as we don’t believe in violence”, Dr Farooq Abdullah said while addressing the day-long convention of National Conference Central Zone at Sher-e-Kashmir Bhavan.

The NC President referred to the repeal of three farm laws on the face of stiff resistance by the farmers together with 750 sacrifices and said the Centre was forced to announce rollback fearing poll debacle in five states. He said the farm laws were passed in huff, notwithstanding the demand for debate and discussion by the opposition ahead of their passage. Such was the arrogance of numbers that no plea of sending the farm bills to the select committee was heeded to. He said ultimately the government had to bow down before the strong will of the farmers. He said democracy is all about discussion and creating impediments in this process is against the democratic ethos of the country.

Decrying the August 2019 political developments, Dr Farooq Abdullah described revocation of special status to J&K as snatching of their rights. The people of this state have acceded to Mahatma Gandhi’s India and not that of Nathuram Godse. He said the hate and communal politics is not in the interest of the nation and the BJP should better realise it.

“We are not anti-nationals’ ‘, he said while assailing the communal forces to see the compatriots through tainted glasses. He said India belongs to all , irrespective of region, religion or caste. The nation will flourish by remaining inclusive, he added.

Dr Farooq Abdullah also questioned the type of democracy being practised by the BJP and referred to the expulsion of 12 members from Rajya Sabha. He said the decision is prompted by the intention of seeking passage of bills as the numbers do not favour the government.

On the reported appointment of candidates from outside, the NC President said this amounts to marginalizing the educated unemployed of Jammu and Kashmir and depriving them of the source of sustenance. He  lashed out at policy planners for such decisions and said the day is not far when the outsiders appointed here will have to go back and vacate the posts for the permanent residents of Jammu and Kashmir.

Dr Farooq Abdullah also dwelt upon the prevailing political situation across the country and referred to extension of 50 kilometre jurisdiction to BSF in Punjab, saying this is reflection on the capability of the Punjab Police. Such decisions could have been averted, he said and feared Nagaland like situation in the border neighbouring state.

The NC Chief also expressed concern over the state of affairs in Jammu and Kashmir, saying bureaucrats have become authority unto themselves, which has subjected the people to miseries and difficulties. This fact is being even acknowledged by the BJP leaders themselves, who are openly expressing concern. He said the anti-poor decisions are galore and referred to halting of Durbar Move, which had been consciously introduced by the Maharaja to ensure integration among the people of Jammu, Kashmir and Ladakh. He said the move has hugely impacted the Jammu businesses. He questioned the claims of normalcy and revival of tourism across the state.

Dr Farooq Abdullah also dwelt upon the problems being faced by the farmers in Jammu and Kashmir especially in the wake of recent hailstorm and damages caused to the standing crops.

Earlier, the Central Zone adopted five resolutions seeking restoration of Article 370 and Article 35A besides statehood to Jammu and Kashmir, effective measures to curb inflation and rising prices, jobs to unemployed, repeal of decision with regard to Durbar Move and providing respite to farmers.