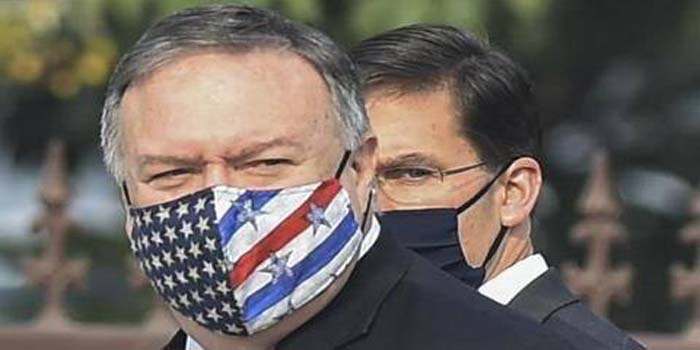 Chinese diplomats in New Delhi and Beijing went on overdrive on Wednesday, launching sharp counterattacks on the United States after secretary of state Mike Pompeo promised to support India in its confrontation with China after the India-US 2+2 strategic dialogue.

“The US will stand with the people of India as they confront threats to their sovereignty and to their liberty,” Pompeo told a news briefing in national capital Delhi just before wrapping up his India visit and proceeding to Sri Lanka, Maldives and Indonesia. US defense secretary Mark Esper, who had delivered the opening statement at the joint media briefing in New Delhi, had also declared that the US would stand shoulder-to-shoulder in support of a free and open Indo-Pacific, in light of what he called “increasing aggression and destabilising activities by China”.

The two remarks – there were others as well – were unusual because visiting foreign dignitaries are expected to steer clear of negative references to a third friendly country at bilateral public events. Pakistan and its terror factories had been the only exception to this rule at joint events in New Delhi. On Tuesday, the joint Press conference was a break from this tradition, implying that India was bracketing China with Pakistan.

Like always, Foreign Minister S Jaishankar and defence minister Rajnath Singh did not name China. Behind closed doors, India has clearly been much more explicit. “The challenge of defeating the pandemic that came from Wuhan also fed into our robust discussions about the Chinese Communist Party,” Pompeo had told the briefing, underlining that the communist party was “no friend to democracy”.

One step at a time, a person familiar with India’s gradual approach later explained, underlining that a shift in New Delhi’s approach was likely to get more pronounced with passing time if China did not show any intent of resolving the stand-off along the Line of Actual Control. China’s People’s Liberation Army had triggered the stand-off in early May this year when its troops went beyond the routine patrolling points and stayed put. Over the next six-odd months, China and India have moved tens of thousands of soldiers closer to the stand-off points.

It has been a continuation of an approach that New Delhi has adopted for decades and was grounded in the belief that China will accommodate India if it brushed disagreements under the carpet for the larger good of the relationship.

In an interview to Times Now, Pompeo said the US didn’t want a conflict to break out between India and China. It wouldn’t be good for either of the two, or the world. But he did make it a point to underscore that “anytime a nation shows weakness, you invite Chinese communist party aggression”.

Indian officials who have tracked the 175-day long stand-off at Ladakh agree with this assessment.

New Delhi has taken steps to stand up to Beijing. In terms of the pre-emptive action taken by commandos from the Special Frontier Force to take control of the northern bank of Pangong Tso in August this year and diplomatically too.

India has also invited Australia to join its high-level Malabar naval exercises with Japan and the US, an invite that practically turns the exercise into a QUAD affair.

Back in 2007 when India had invited Australia as a non-permanent member for the Malabar exercise, Beijing had made its displeasure known prompting India and Australia to take a big step back. As QUAD appeared to fizzle out over the next few years, an emboldened Chinese Foreign Minister Wang Yi brushed aside the four-nation informal grouping in 2018, confident that it would dissipate like “sea foam”.

Speaking at a Kuala Lumpur event earlier this month, China’s Wang Yi came around to acknowledging that the US Indo-Pacific Strategy presented a “big underlying risk” to stir up confrontation among different groups and stoke geo-political competition with the Cold War mentality.

But it has been mostly Xi Jinping’s aggressive expansionist approach that has driven a diverse bunch of countries to come together.

Former chief of the joint staff of the Japan Self-Defense Forces Katsutoshi Kawano told the Mount Fuji Dialogue, an annual gathering of business and political leaders from Japan and the US that “China’s recent border clash with India and escalating tensions with Australia over its response to the coronavirus resulted in Quad members strengthening their cooperation”.