Where have all “ disappeared persons” in Pakistan gone ? 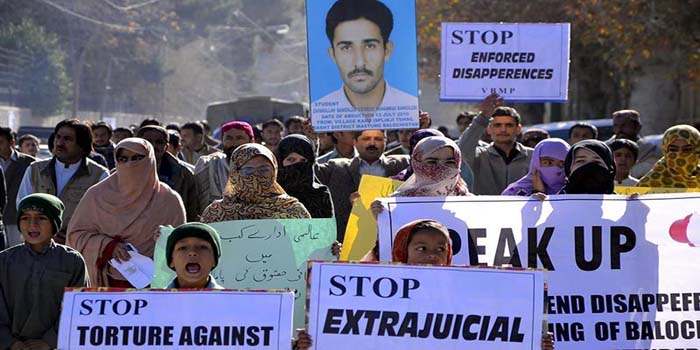 Pakistan has been very active  at the UN General Assembly and also at UN Human Rights Council in focusing what it alleges gross human rights violations in Jammu and Kashmir , especially after the August 5, 2019, decision of Delhi to scrap the special status of the erstwhile state, but what it has not done is  to look at its backyard which is a fertile ground of the extrajudicial killings , enforced disappearances and an overall atmosphere of fear . The army has assumed all powers and the so-called ruling party or the coalition is  just a puppet.

It  has refused to answer questions of its own former prime minister  Nawaz Sharif .He, while  counting the crises heaped on Pakistan by the hybrid administration in which the army calls all the shots all the time , asked :”Who should I hold responsible for this?, He was reflecting on the sate of the economy and the expanding poverty in Pakistan .

His subsequent question raised at his interaction with his party leaders and workers through video conference from London , was more loaded: “ Just ( Prime Minister) Imran Khan or those who are really responsible?”

“ Imran’s selectors , you will have to answer this. You cannot go home without answering .  Without Pakistan’s parliament , its institutions cannot operate . Even the judiciary cannot work.” This was not a finger-pointing in the typical political style rivalry , but a statement of facts that army has subverted all the institutions in Pakistan.

In  March 2011, Pakistan Government had constituted  a high-sounding but good-for-nothing  Commission of Inquiry into Enforced Disappearances ( COIED) with  a mandate to trace the whereabouts of allegedly enforced disappeared persons  and fix responsibility on individuals or organisations responsible.”

Even if these cases are to be taken at their face value, certain questions are inevitable : 2150 persons returned home, but where were they . Did any one ask them why they had disappeared from their homes and if they have returned home, should the matter end there itself ?  Their ordeal is not known , and if they are not speaking, what is behind their silence , fear or threat of the establishment.? Why as many as 842  were in internment centers, what is their crime? 529 in prisons , what for and why ? 216 persons died- why and how  did they die  or  were they  simply killed in anonymity. ? What was basis for deleting 981 cases ,and at whose behest , what were the grounds for doing so. There is no explanation thereof. Cases pending , 2068? It means what ? It could be , in the absence of  explanation ,  that the COIED, is trying to hide things.

I A Rehman , a renowned columnist of Pakistan summed up it like this ,” While these references to laudable-looking interest in enforced disappearances sustain the illusion that something is being done to deal with one of the country’s main scourges, the painful reality on the ground is that the government’s principal instrument for tackling the issue of enforced disappearances is still a good-for-nothing organisation called the Commission of Inquiry into Enforced Disappearances (COIED).”

International  Commission of Jurists ‘s comments on COIED and its performance are telling enough  for the international community . “ This Commission ( COIED)  has failed in holding even a single perpetrator of enforced disappearances responsible in its nine years.” These were the comments of Ian Seiderman , ICJ’s Legal and Policy Director.

“A Commission that does not address impunity, nor facilitate justice for victims and their families, can certainly not be considered effective.”

Hundreds, if not thousands, of people continue to be “missing” in Pakistan following their apparent arrest or abduction by or with complicity of the state. The UN Working Group on Enforced Disappearance has described a “culture of entrenched impunity” regarding the practice. This tells all the story of what is happening in Pakistan.