‘Why Qureshi’s phone call to me unnerved Delhi?’ 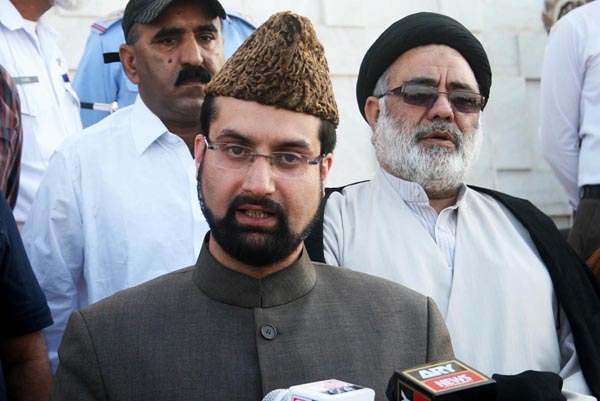 The Hurriyat chairman said on Tuesday, Qureshi rang him up and told him that Pakistan will continue with its moral and diplomatic support to Kashmir at all levels.

I wonder why a phone call to me from the Pakistan foreign minister Shah Mehmood Qureshi has “irritated and unnerved” New Delhi, the chairman of Hurriyat Conference (M) Mirwaiz Umar Farooq said Wednesday, day after Quershi rang him up to discuss the Kashmir issue.

Addressing a press conference here, Mirwaiz said Pakistan is a party to the Kashmir dispute.

What are they (New Delhi) objecting to? Are they objecting to why Pakistan is highlighting daily misery of Kashmiris whose every right including the right to live is subject to the whim of an ordinary soldier on the ground who can shoot at will under legal cover and get away with it, or worse, be rewarded for it,” he said. “Should the world not know of it? If India cares so much about its image, let them walk their talk of being a democracy and resolve the (Kashmir) dispute democratically through talks and hold the promised referendum”.

The Hurriyat chairman said on Tuesday, Qureshi rang him up and told him that Pakistan will continue with its moral and diplomatic support to Kashmir at all levels.

“He told me that a delegation from Pakistan will be sent to the House of Commons to highlight the Kashmir issue and miseries inflicted on Kashmiris,” Mirwaiz said.

He said the Pakistan foreign minister also told him that New Delhi’s response to Pakistan’s peace overtures and repeated dialogue pleas was “negative.”

“He also told me that New Delhi didn’t respond positively to repeated dialogue offers of Pakistan Prime Minister Imran Khan and they can only wait till elections in India are over,” Mirwaiz said.