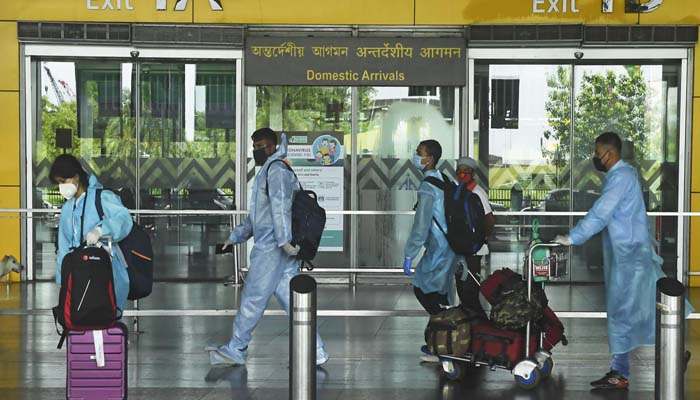 A fresh set of travel guidelines has been issued as two new, highly more infectious strains of Covid — the South African and the Brazilian strains — have been detected in India. The new rules apply to all incoming international passengers except those from the UK, Europe and Middle East, the health ministry has said.

The South African strain of the virus has been detected in four people and the Brazil variant seen in one so far, the Indian Council of Medical Research — the nodal body in the country’s battle against coronavirus — has said. Of the other highly infectious variety, the UK strain, there are 187 cases in India.

Under the new rules, only passengers who test negative in RT-PCR tests 72 hours ahead of departure will be allowed to board the aircraft. The exception will be passengers who are travelling because of a death in the family.

In a tweet this evening, the health ministry said: “Attention Passengers! All incoming international travellers (except travellers coming on flights originating from UK, Europe and Middle East) should make sure that they follow the guidelines issued by @MoHFW_India”.

Passengers travelling through UK, Europe and the Middle East have to compulsorily get an RT-PCR upon arrival at their own expense.

This will cover passengers from South Africa and Brazil as well, since there are no direct flights from these two nations.

According to ICMR chief Dr Balram Bhargava, existing vaccines have the potential to neutralise the UK variant and experiments are on to assess the effectiveness of the vaccines against the South African and Brazilian variants.

“ICMR-NIV is attempting to isolate and culture the South African variant of SARS-CoV-2, while the Brazil variant of SAS-CoV-2 has been isolated and cultured at ICMR-NIV-Pune,” he said.