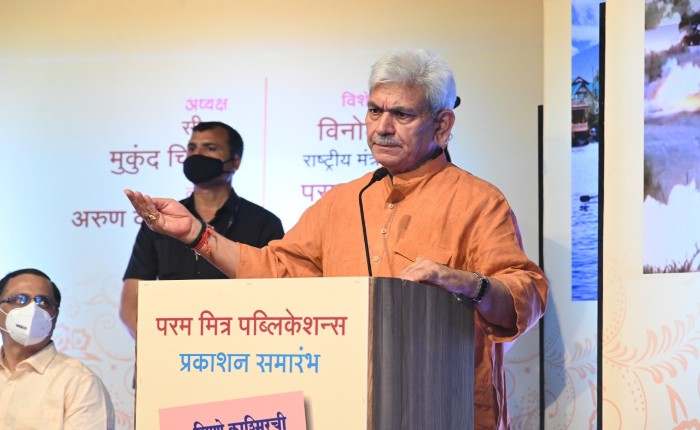 “People of J&K were deprived of basic rights. Few vested interests hampered the development reaching the doorsteps of the people for decades”, says the LG

J&K has a development deficit of 73 years; there will be challenges to fill the gaps, administration is fully prepared to deal with it: LG

Development of J&K, aspirations & dreams of people were suppressed by few people under thoughtful strategy. Steps being taken to correct the errors of history: Lt Governor

“With new economic and industrial reforms, J&K has become a promising destination for investors”.
Lieutenant Governor, Manoj Sinha made these remarks during the release of the book – Tipane Kashmirchi (Notes on Kashmir), untold stories authored by Sh. Arun Karmarkar.

While speaking on the occasion, the Lt Governor observed that changes that have taken place in the last 18 months have given a determined push to the socio-economic development, besides empowering the common people in Jammu and Kashmir Union Territory for the first time.

“J&K has a development deficit of 73 years and there will be challenges to fill the gaps, but the administration is fully prepared to deal with it”, said the Lt Governor.

Speaking on Economic reforms, the Lt Governor observed that a new Industrial Development Scheme of Rs 28,400 crore has been unveiled for attracting investment in the UT, besides creating opportunities for the youth. With such a scheme and a ready land bank, the investors would find J&K as a promising destination for their investments. The UT Government is committed to take industries up to the block level for inclusive growth.

I have visited different parts of the Union Territory continuously in the last 6 months. 70 percent of the population is below 35 years and there is no shortage of manpower and resources. We are taking comprehensive measures through initiatives like Mission Youth to harness demographic dividend and ensuring youth’s engagement in a constructive way, contributing to the overall development of J&K, the Lt Governor added.

Underscoring the reformative initiatives taken by the Government for the growth and prosperity of J&K, the Lt Governor said that the second installment of Rs 250 crore to Jammu and Kashmir Bank as Interest Subvention was disbursed on the 11th February. The first installment of Rs 250 crore was released last year as part of our Rs 1350 crore economic package and 3 lakh 41 thousand small and big business units were given relief from the trauma of the corona epidemic.

On power generation, the Lt Governor said that despite the immense potential of Hydro Power, only 3500 MW of power was generated in J&K in the last 73 years, causing small businesses and citizens to face power problems. We have approved several projects worth Rs 54,000 crore within 3-4 months and we aspire to generate 3500 Megawatt of power in the next four years to make Jammu Kashmir a power surplus.

Compared to other states, the budget of Jammu and Kashmir has been four to five times more in per capita, yet the development that should have been done, the kind of industrialization that should have taken place has not happened, he added.

The Lt Governor, while speaking on the opportunities created for the young entrepreneurs observed that an amount to the tune of Rs 264 crore has been disbursed as financial assistance to 16,800 youth (against the assumed targeted of 8500) identified from all the 4290 Panchayats in J&K to become entrepreneurs under the Back to Village. All the Panchayats have been provided with sports kits worth Rs 20,000 each during the Back to Village-3 programme as per the local requirements, he added.

The Lt Governor remarked that – “The people of Jammu and Kashmir were deprived of basic rights. Few vested interests hampered the development reaching the doorsteps of the people for decades”.

He said that there is no escape from accepting the truth that deliberately, under a thoughtful strategy, the development of J&K, the aspirations and dreams of the people were suppressed by a few people and a particular section. We have taken another big step to correct the errors of history.

Speaking on the abrogation of Article 370 and its impact, the Lt Governor observed that on 5th August 2019, the Hon’ble Prime Minister Narendra Modi Ji, by abrogating Article 370 of the Constitution, gave Jammu and Kashmir the status of Union Territory and fully integrated it into the mainstream of the nation. And for a long time, the conspiracy being run by those certain classes of people against the people of Jammu and Kashmir was destroyed in an instant.

Quoting the Prime Minister, the Lt Governor said – “Articles 370 and 35A gave Jammu and Kashmir nothing but massive separatism, terrorism, nepotism, and widespread corruption”.

With a population of 1 crore 30 lakh, J&K was not only connected with the mainstream of the country but the new dawn of development and trust has been witnessed across the Union Territory, he added.

The Lt Governor observed that recently, peaceful, violence-free and fair elections were held for the District Development Council and the three-tier Panchayat system was established to strengthen the grass root democracy, paving the way for progressive future of the UT.

The polling stations across the UT witnessed long queues of enthusiastic voters and people came out to vote in large numbers, despite harsh weather conditions, with the voter turnout percentage even in the traditionally low percentage areas registering manifold increase, which itself manifests that faith of the people of J&K in the democratic process has deepened, he added.

Today, Jammu and Kashmir is number one in the entire country in terms of progress under the Pradhan Mantri Gram Sadak Yojana. Every village will be connected with road, power and water supply in J&K in the next two years. A robust mechanism has been put in place for effective and prompt redressal of people’s grievances.

Sectors like handicrafts, food processing, horticulture, tourism, education, skill development, sports, culture, and the film industry are growing at a rapid pace. The UT administration is fully committed to make Union Territory the most favorite destination of filmmakers, the Lt Governor added.

Bringing reforms in the horticulture sector, the UT Government has initiated the process for high density plantations, cold storage cluster, market linkage, and GI tagging of local products, besides, the target of covering 5500 Hectares of land in the next five years with a major focus on Apple, Walnut, Cherry, Pear, and other significant horticulture produce. High Density plantation of Apple, Walnut, Cherry, Flowers, etc would increase the income of farmers by 3 to 4 times, observed the Lt Governor.

These are just a few glimpses of the development revolution that is taking place in Jammu and Kashmir, the Lt Governor said.

Throwing light on the history of Jammu and Kashmir, the Lt Governor observed that a lot of upheavals can be seen if one goes through the facts.

A National Seminar and Exhibition on “Memories of 22 October 1947” in collaboration with the National Museum Institute of History of Art, Conservation and Museology was organized in Srinagar so that the younger generation of the UT can be told about the brutal atrocities of Pakistan, and how the people there confronted them.

Documentary evidence of treacherous attack by Pakistan, Stories of resistance and bravery of the Indian Army were told to the people, during the seminar. A lot of time has passed since the 1947 invasion, but the wounds have still not healed, and it is our responsibility that the people of Jammu and Kashmir know the truth behind those incidents, the Lt Governor added.

Terrorism is the real enemy of humanity. The process of uprooting the fear of terrorism is going on at a rapid pace, he maintained.

The Lt Governor conveyed his best wishes to the author for his book and appreciated him for bringing out deeply researched facts about Jammu & Kashmir.