Youth killed in clashes at Qazigund 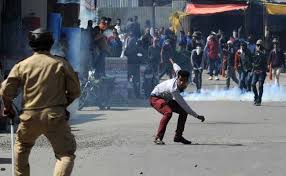 Reports said that violent clashes erupted near encounter site at Chowgam following the killing of five militants in an encounter.

The forces used pellets and fired some aerial shots to disperse the protesting youth resulting injuries to sixteen persons. All the injured where taken to nearby hospital where from a critical wounded person Rouf Ahmad Ganai referred to Srinagar hospital. However Rouf succumbed on the way.

Rouf according to doctors had received a bullet wound in his neck.

When reports last came in the clashes were going on in the area.