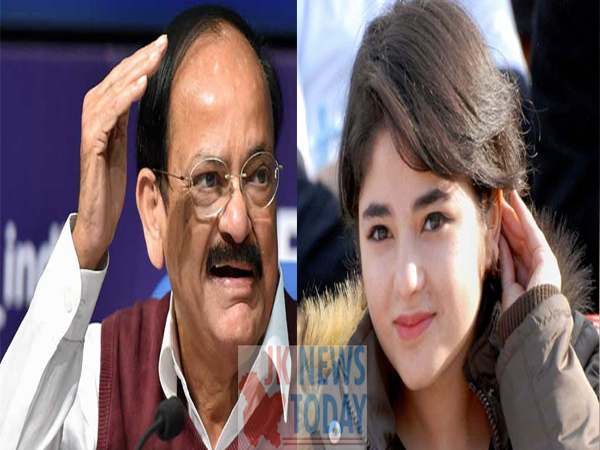 Union Minister for Information and Broadcasting M Venkaiah Naidu Tuesday came out in defence of Dangal actor Zaira Wasim, who issued an apology on social media after being trolled for meeting Jammu and Kashmir Chief Minister Mehbooba Mufti. “All must stand by her side, be united in showing her support. We must encourage talent and not muzzle it under frivolous controversies,” Venkaiah told reporters at IIMC.

In the wake of the controversy, the Union Minister also slammed “pseudo liberals” for adopting double standards in different situations, pointing out their solidarity against the intolerance debate. “Shows irony of ultra liberals who vehemently came out together to speak against flimsy premise of growing intolerance,” he said.

“Zaira Wasim episode shows pseudo liberals react to different situations, adopt double standards. What is her fault?” Naidu asked while urging everyone that the 16-year-old actor should instead be appreciated for talent.

“Sense of great achievement that children from J&K are coming into the mainstream and are showcasing their talent. Zaira Wasim from Jammu and Kashmir has shown the path, one should really feel proud and appreciate her, rather than trying to be verbally violent,” Naidu added.

Zaira, who essayed the role of a young Geeta Phogat in the film, issued an apology for “offending” and “unintentionally hurting” people after her meeting with Mehbooba triggered a controversy. Subsequently, she replaced her initial post with another one, urging people not to blow the issue out of proportion. However, she deleted that post as well.