Zero-tolerance to delay in projects : Mehbooba 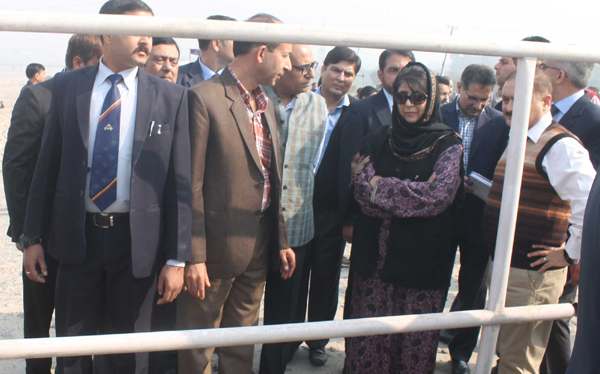 Chief Minister Mehbooba Mufti  said  on Friday that there would be  zero tolerance  to the delays in the completion of all ongoing development projects.

Reviewing on the spot the pace of work on several key developmental projects during her tour of the Jammu city, the Chief Minister impressed upon the officers to work in synergy with each other to remove any difficulties coming in the way of progress of works. She regretted that much of the time for developmental activities, particularly in Kashmir, got wasted and directed the officers to make up for the lost time.

Mehbooba Mufti advised the officers and project executing agencies to explore the possibility of starting works simultaneously on different components of a project to avoid time loss. In this connection, she suggested starting landscaping works at sites where civil or any major works have been completed or are nearing completion. She also asked for immediate plantation at these sites to enhance the aesthetic appeal and in view of the approaching plantation season.

The Chief Minister visited the proposed City Chowk parking project and took on the spot appraisal of the works being carried out. She was informed that work on the project is apace and the facility is likely to be completed by early next year. She enquired about the relocation of some nearby utilities and asked for expediting the same.

At the artificial lake being developed at River Tawi, the Chief Minister was informed that the gates are ready and the project would also be completed by early next year.

The Chief Minister inspected the Jammu airport expansion site and enquired about the status of the project. She was informed that the process of transfer of land and utilities is in the advanced stage after which the Airport Authority of India would start its works. She was informed that after the expansion the area of the airport would spread to 30, 000 square feet with 3000 passengers per hour capacity.