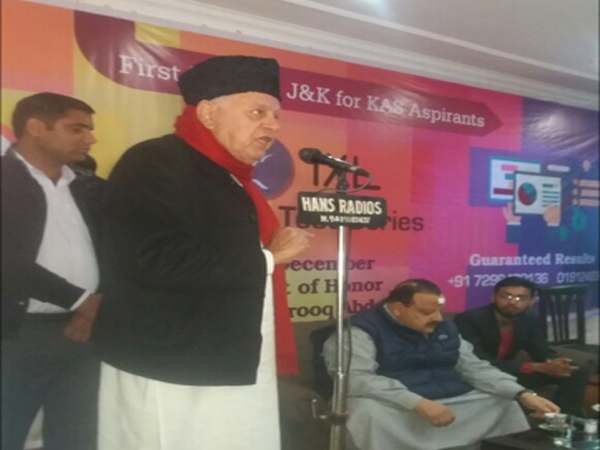 National Conference president Farooq Abdullah on Thursday claimed that  at least 10 of the ruling Peoples’ Democratic Party MLAs had approached him to join the NC , but  he declined as he didn’t believe in “ defections.”

Farooq Abdullah made this disclosure in response to charges leveled by  Chief Minister Mehbooba Mufti  after the NC president Farooq Abdullah  declared open support and pledged to follow the Hurriyat Conference ‘s plan for right to self determination or goal for “ azadi” on the occasion of the 111th birth anniversary of the party founder Sheikh Mohammad Abdullah.  This had created stir in political circles , some of them sensing the reversal of his original stand of  Jammu and Kashmir being an integral part of India.

Lashing out at  Mehbooba Mufti who had charged Farooq Abdullah and his party National Conference  with “ being part of the stone throwing protests and dislodging the PDP- lead coalition government,”  the NC leader said that   all these charges were “ baseless”. He  told media that  he has  never believed in this kind of politics.

“ I am telling you here that her party’s ten MLAs wanted to join the National Conference, but I said nothing doing, because we don’t believe in   aya Ram and Gaya Ram”- the defections through revolving doors of  changing parties for getting into power.

Farooq Abdullah reminded Mehbooba Mufti  that in 2002, NC had  28 MLAs and PDP had just 16. “ We could have formed the government that time, but we didn’t do that , because our politics is principled and clean.”

Taking Mehbooba Mufti to task for   blaming National Conference cadre being behind the current unrest in the Kashmir Valley,  Farooq Abdullah claimed that “neither Farooq Abdullah nor any of his party workers is involved in stone throwing  or picking up guns. We have suffered, and every one knows that NC cadres were the worst victims of violence . Many of our party workers were killed.”