3 Rafale fighters to land in India on March 31, UAE to give mid-air refueling 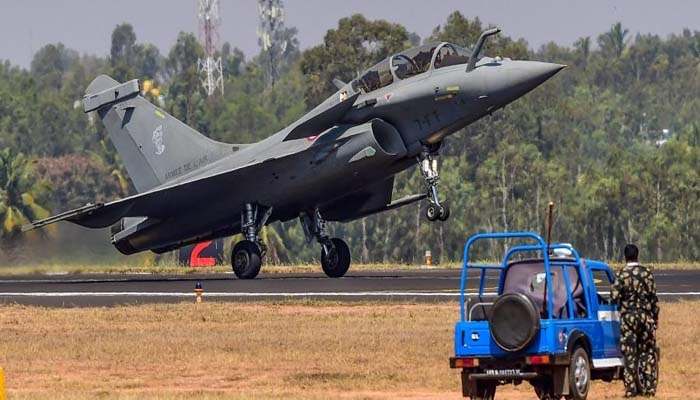 According to sources in Dassault Aviation, manufacturers of Rafale, the three fighters will take off from Merignac airbase in Bordeaux at 7am on March 31 and are expected to land in Gujarat around 7pm. The next batch of nine aircraft will take off next month, out of which five will be inducted at Hashimara airbase in north Bengal. The Rafale fighter is equipped with top of the line smart weapon systems and is designed for optimum damage to the adversary.

While the Indian Air Force (IAF) will get its two squadrons of Rafale fighters as per the 2021 delivery schedule, the Modi government is interested in the joint development of French Safran military aircraft engines in India under the Aatmanirbhar Bharat mission. Although the Rafale is powered with two M88-3 Safran engines with a thrust of 73 Kilo Newton, the national security planners want Safran engines of higher thrust (90 -100 KN) to power Defence Research and Development Organisation’s (DRDO’s) advanced multi-role combat aircraft (AMCA). AMCA will have two engines and will be equipped with state-of-the-art weaponry. DRDO’s Tejas project is at present powered by GE-404 engines. All the military manufacturing will be concluded under government to government route with no room for any agent or middle-man.

The India-French strategic ties have deepened further with Paris providing New Delhi with the latest technology through the joint development route. The India specific Rafales not only have the best weapons package available but this will continue to be upgraded from time to time.