THE  KAILASHNATHA  TEMPLE  AT  ELLORA  –AN ANCIENT MARVEL OR A MYSTERIOUS HAVEN ?

Ellora, a UNESCO world heritage site is a place near Aurangabad Maharashtra where a complex of 34 rock cut   caves including a unique temple (cave16) are located.

As per historians, sometime between the 1st & 10th millennium AD, on the ancient trade route between Paithan and Ujjain on the Sahyadri Hills, a complex of cave temples began to take shape, one of them the Kailasha. It is not a regular building that was built up but a whole mountain was vertically carved down as a monolithic piece into individual interconnected structures forming a multistoried temple complex on a scale never achieved on the planet. On the slope of a mountain, beginning at the top, tons of rock was scooped out to create trenches (at right angles) cut down vertically to the base forming a rectangular court 300’x175’– (aligned EW).

Within this courtyard so created, is the main SHIVA TEMPLE (Size-150x100feet, 95 Feet High) & three stories high. A rock bridge connects the porch of the temple to another free standing NANDI MANDAPA (Size-20X20feet, 50feet high). This Mandapa is again connected on the opposite side to the Main entrance, a double storey gatehouse GOPURAM in the same manner. On either side of the Nandi Mandapa are two giant DHWAJSTHAMBAM (each 50feet High).

A three storied high colonnaded gallery running along the bottom of the cliff face on the three sides of the trench faces a passage or Parikrama path that surrounds the temple.

Originally flying bridges of stone connected these galleries to the main temple structure.

and door openings and flying bridges connecting the whole complex.

The entire monument made by excavation and not by construction.

WHEN & WHO BUILT THIS STRUCTURE?

The Kailasha Temple of Ellora is attributed to KRISHNARAJA –I (C757-83 AD) of the RASHTRAKUTA empire during the 8th century, however this attribution is not completely certain because the epigraphs on which it is based are not physically connected to the caves and do not date Krishnaraja’s reign.

Considering 400,000 tons of rock was removed manually with the help of chisels and hammers, it would take 7000 craftsmen a 100 years to do that!

As per other sources it was actually built in 18 years! which comes to 5 tons of rock excavation every hour!

How was this possible? Even in modern times this is not an easy task.

This has given rise to speculation that the craftsmen had access to an advanced construction technology or were they being helped by someone (extraterrestrials). If yes then why?

Within the Kailasha Temple in plain sight exist several tunnels that are long and deep, going horizontally and vertically down and then taper off to points beyond which a human can no longer pass but they are still continuing. How were these tunnels constructed then? What was their purpose? Also within the complex of the surrounding caves are vertical holes or shafts deep enough that it is impossible to retrieve fallen objects.

It is said that the course of the river flowing nearby was so ingeniously diverted here that its water fell drop by drop on the Shivalingam for many centuries. A rainwater harvesting also seems to be in place.

Even the water that is poured over the various Shivalingams in the complex lead to channels that do not drain out anywhere but seems to go down vertical shafts.

Does it point to an existence of an underground city with water sources and ventilation shafts? Who built this and for whom?

Though the Kailasha Temple is dedicated to Shiva, the elaborate sculptures all over the complex depict scenes from the Legends of Shiva and the stories of Vishnu in his various avatars. One of these is a sculpture of Ravana with a Vimana (or a flying device) strapped to his back comparable to a modern day jet pack. 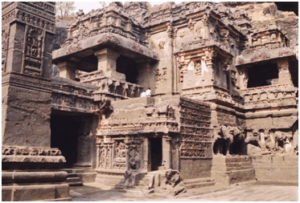 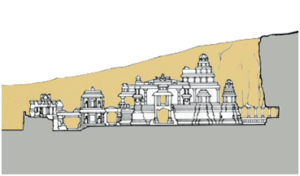 The Vedas mention Vimanas as the flying chariots of various gods.

In the Sanskrit Samraanga-na-Sutraa-Dhara, it is written “Strong durable must the body of the Vimana be made like a flying bird of light material. Inside one must put the Mercury engine with its iron heating apparatus underneath. By means of the power latent in the mercury which sets the driving whirlwind in motion a man sitting inside may travel a great distance in the sky. The movements of the Vimana are such that it can vertically ascend, descent, move slanting forward and backward with the help of these machines humans can fly in the air and heavenly beings can come down to earth.

Modern day space scientists have just begun to discover red mercury as a source of energy so were the ancients Indians in the know of advanced technologies or were connected to an advanced race who were coming to the earth flying in their Vimanas?

A copper plate from the period of Karka-II (812-13AD) states that a great edifice was built by Krishnaraja at Ellapura and even the celestial beings moving in the sky were struck by its magnificence! Was the edifice actually designed so as to be visible from above to guide the Vimanas?

In the traditional Dravidian temple Architecture style there are huge magnificent entrance gates or Gopurams, yet the Kailasha Temple at Ellora features a low Gopuram. The builders built a masterpiece yet the entrance was kept low key and the temple inside is hardly visible from eye level outside. Was it done on purpose to keep normal mortals away?

One of the versions on the location of Mount Meru (the mythological mountain with its connection to the stars and to the centre of the earth) Talks of Meru in the Narmada region of Gondwana (around the site of the KAILASHA temple), so is the mythical mountain a reality at Ellora?

Were the humans or someone else flying down to this site and entering the tunnels to an underground city?

One day we may be able to unravel this mystery. Till then we can only marvel its art and architecture and the people who built it.

*The article and the idea behind it is a personal speculation of the Author based on her readings and observations.