The true essence of ‘Kanjak Poojan’ 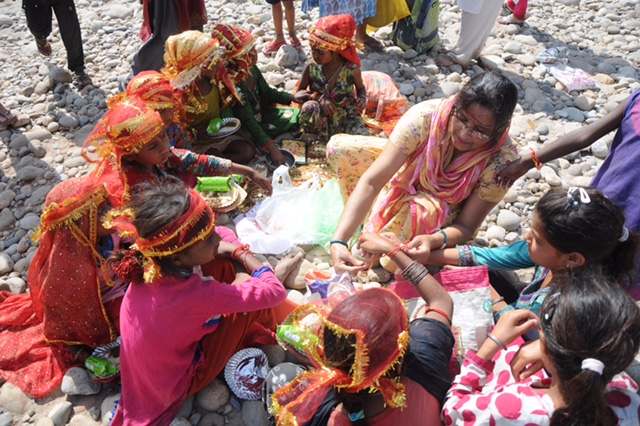 With crime against women increasing, ‘Kanya Poojan’ reinforces the fact that women must be respected. Navratri is time to celebrate the power of feminity.

Navratras, the nine-day festival of fasting has come to an end. Yesterday (Oct 9, 2016) was Durga Ashtami and today (Oct 10, 2016) is Ram Navmi. Navratras, a prominent Hindu festival, is celebrated twice in a year; the first one observed in April-May (Chaitra month) and the second in September-October (Ashwani month). The former ends with Durga Puja and the latter ends with the celebration of Dusshera. Incidentally, these two periods mark the beginning of summer and winter seasons.

During these seven or eight days of fasting, people live on just juices, fruits, salads, yoghurt and Satvik food. Some of the devotees break their fast on the eight day or Ashtami while others on the ninth day or Ram Navami.

Since childhood I have seen my grandmother and my mother calling little girls – called Kanjaks to our house on this day. These young girls are symbolic of the Goddesses that they had been worshipping in the past 7 or 8 days. Their feet are washed, worshipped and are then offered the traditional “Poori, Halwa and Kaala Chana” and are usually given some token money along with some small knickknack like hair accessories, bangles, red chunnis etc. I still remember when as children we were made to feel so important and we had “appointments” to visit this Aunt’s place at so and so time and that Aunt’s place at that time for this traditional custom :).

So, it will be Poori, Sookhe Kaale Chane (Black pea) and Sooji Ka Halwa for breakfast today. It’s a lovely combination – Halwa, Poori and Chane – and can be had as a weekend breakfast too!! Might sound like a nightmare for the figure conscious but most of us would do anything for these salty and sugary treat.

In the city of Temples, Kanya Poojan is performed throughout the nine days of Navratras at Bahu Fort Temple with religious joviality.

However with each passing year many people are finding the ritual of Kanya Poojan losing its charm and becoming meaningless. Nowadays due to skewed sex ratio, finding young girls in many localities is a herculean task. All the kids are off to school. The only strata left out from schooling are the children of maids and other unskilled laborers, who live in some slum or those sitting outside the temples begging for alms. Throughout the year we keep demanding the Right to Education for all but on this day, we don’t mind that these under privileged kids are not going to school. Monika Chib, a localite shares, “Every year, we face problems in finding young girls for the ‘Pooja”. Talking about the relevance of Kanya Poojan, Monika emphasizes that in a society where the women have not attained equivalent position to that of men and where the ever growing violence against female – foeticide, infanticide, sexual abuse of minor girls and instances of rapes have attained distressing proposition, Kanya Poojan twice in a year reinforces the fact that the fairer sex must be respected. The women should be the first ones to acknowledge, express and worship their feminity and not mistake it for inferiority.