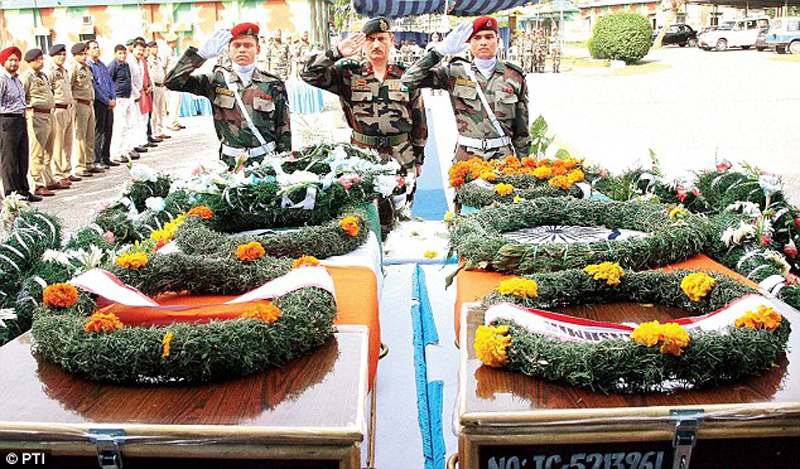 Srinagar, November 7  ( JKNT)  The National Investigation Agency ( NIA) may be stepping closer to  cracking the September 18th terror attack at an army base in the frontier town of  Uri  in which 19 Indian soldiers were killed .

This indication has been made  by  The Hindu newspaper on Monday . Its reporter Vijata  Singh  in her report  said that the “NIA  is basing its investigations on a “blue diary” recovered from one of the three Lashkar-e-Taiba (LeT) terrorists who were killed while attempting to storm an Army camp in Kupwara on October 6.

The diary could prove to be a vital piece of evidence as investigators suspect the September 18 attack on the Army camp in Uri too was carried out by LeT operatives, though the Army was quick to name the Jaish-e-Mohammad barely hours after the attack.

The diary contains the name of a publication house near the residence of LeT founder Hafiz Saeed at Muridke in Pakistan.

The newspaper quoted  a senior official having said,” “The name of the publication house is not the only clue. The diary has other details as well linking the terrorists to LeT and Hafiz Saeed. Several notes in Urdu suggest that the terrorist, who has identified himself as Faidullah in the diary, was living in the Muridke camp and had received training there.”

The diary was recovered by an NIA team which took over the investigations on October 9, three days after the three terrorists were killed in an encounter.

It also quoted  a Home Ministry source said the local police and the Army did not properly search the bodies and vital evidence would have been lost had the bodies been disposed of. However, Baramulla SSP Imtiyaz Hussain denied the allegations.

The three terrorists were part of a suicide squad and had booby-trapped their bodies with grenades, to inflict casualties on security forces.

During the Pathankot operation, one of the Jaish-e-Mohammad terrorists had hidden a live grenade in one of the pouches of his jacket before he was killed. This led to the death of NSG commando E.K. Niranjan when he was retrieving the body.

A vial containing some medicinal liquid was also found on the attackers with an Urdu sticker saying: “khoon rokne ke liye” (to stop bleeding). The official said the terrorists had come for a long haul.