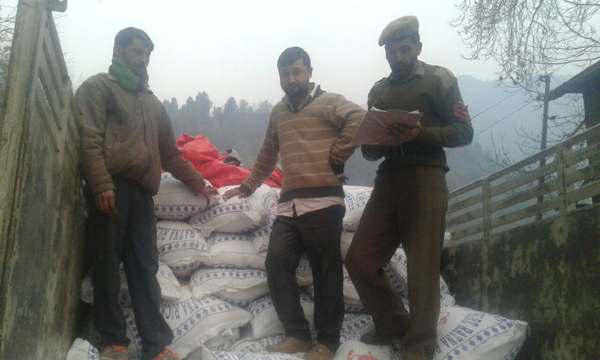 Doda  Police seized one  TATA 407 vehicle  loaded  with  194  bags of ration (rice) carried  from the Anganwadi Store Gandoh and was transporting the same to Changa for illegal sale.

Reports said that on a tip off Police Party from Police Post Changa Gwari laid a naka at Gwari Gandoh, during checking, one vehicle TATA 407 bearing regd. No. JK06/9284 was intercepted by the naka party and recovered 94 bags of rice weighing 50 KGs each from the vehicle.

The vehicle was being driven by one Bilal Ahmed S/O Manawar Din Sheikh R/O Halore, Tehsil Gandoh.   During questioning, it came to surface that the accused has procured the ration from Anganwadi Store Gandoh and was transporting the same to Changa for illegal sale.

The Police has arrested the accused driver and seized the vehicle. A case FIR No. 126/2016 U/S 409/120-B RPC stands registered at P/S Gandoh and further investigation is going on.