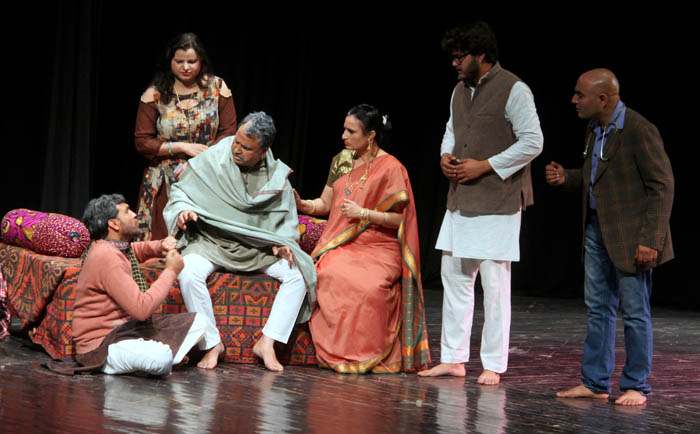 ‘Rovmut Bhatta’ is a satirical take on the journey of Kashmiri Pandits since their forced exile in 1990 after the eruption of militancy in Kashmir valley and the impact it has had on the community caught in the cobweb of terrorism and cross cultural chaos leaving them confused about their future.

The play is also introspection on the community leadership majority of which seems to be confused on how to deal with the situation and the cross cultural upbringing of their children threatening to eradicate their age old unique customs, language, traditions through inter caste marriages etc.

According to the playwright Rakesh Roshan Bhat, “introspection is a great tool to assess oneself. It purifies soul and clears the cob webs in one’s mind. It helps a person to grow and shed ego. Honest introspection triggers insights. Rovmut Batta is a story of deep introspection. It is a story of stock taking of what has gone wrong with KP community and why? Are there only external factors responsible for all the ills that the community is faced with? Rovmut Batta is a satirical comedy with elements of introspection, reflections, nostalgia, resilience and hope”

The director Rohit Bhat says that it is a story of resilience and hope as the protagonist springs back into action even after being in coma for so many years. The optimist would say-if he could do it anyone can do it and the pessimist would say-if he could not do it, no one can adding they are not trying to preach anything and their intention is not to hurt anyone’s feeling but it is an attempt to pause and look back; after all isn’t this what good and meaningful theatre is all about?.

King C Bharati, journalist and social activist has recently entered the field of acting through Vomedh Rangmanch’s ‘Khoya Bachpan’ and ‘Ek Aur Birbal’ has also a significant role in ‘Rovmut Batta’ as Dr. Pradeep. He says that commenting on the social evils should not be taken in negative sense but instead one should take a lesson and go for introspection which is the actual message of the play.