Aamir Kahan tells Zaira Wasim, We are all with  you”, 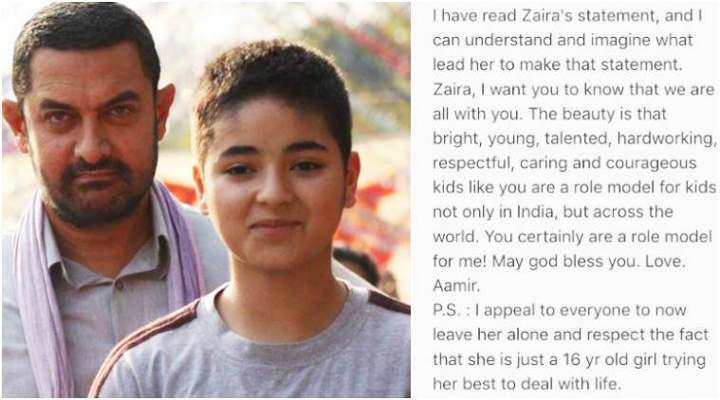 Zaira is role model for kids across the world

Noted actor and producer of  blockbuster “  Dangal” , Aamir Khan has  come out in support of his film’s actor  Zaira Wasim Khan who has been trolled in Kashmir  for having played role in the movie .

Aamir Khan tweeted  and assured, “ we are all with you”, in reaction to the  apology offered by  Zaira  on social media after she was described as a role model for the youth in Kashmir by Chief Minister Mehbooba Mufti

In his statement on twitter, Aamir Khan  wrote :  I have read  Zaira’s statement  and  I can understand and imagine what led her to make that statement.”

“ Zaira I want you to know that we are all with you.”, the actor director  said in an emphatic statement of support for the young Kashmiri girl.

“ The beauty is that bright, young, talented, hard-working, respectful, caring and courageous kids like you are a rode model not only to kids in India but across the world. You certainly are a role model for me! May god bless you, love Aamir. PS, I appeal to everyone now to leave her alone and respect the fact that she is just a 16 year old girl trying her best to deal with life..”

Zaira has  found support from many quarters across the country and abroad  for her excellent role in Dangal and they have decried the men and women on social media who trolled her and made her to apologise and say that she is not a role  model  to any anyone.