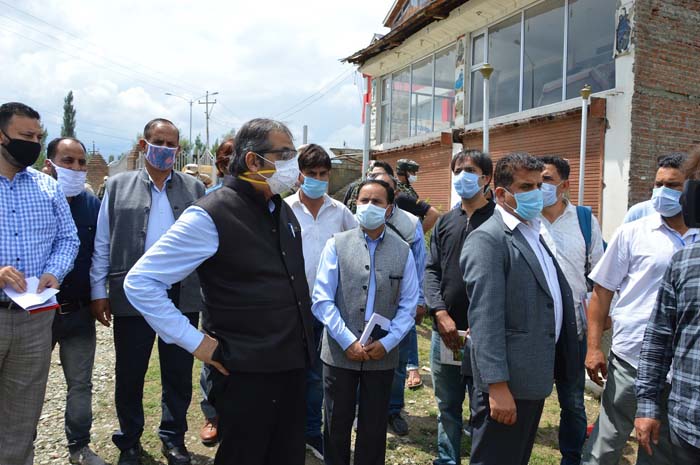 In continuation to the public outreach programme initiated by the Jammu & Kashmir administration, Advisor to Lieutenant Governor Baseer Ahmad Khan today visited Tangmarg area of Baramulla district and took appraisal of the developmental works undertaken in RDD.
The Advisor also met as many as 16 public deputations, who apprised him about the developmental issues and demands pertaining to their areas.
District Development Commissioner, Dr G N Itoo, Director RDD Kashmir, heads of various concerned departments, SDM Gulmarg, district and sectoral officers among other concerned functionaries were present on the occasion.
A delegation of BDC chairpersons highlighted various developmental issues and demands including up-gradation of link roads, strengthening of power transmission network and distribution in view of forthcoming winter season, establishment of Women Degree College at Kunzer. They also demanded empowerment of PRIs through decentralization of powers.
A delegation of farmers demanded enhanced marketing facilities to facilitate better returns of their agricultural and horticultural produce. They also demanded waiving off of KCC loans as the farmers suffered adversely due to present circumstances. Moreover, they demanded enhancement of subsidy component on farm machinery equipments, for bore wells, high density fruit trees for farmers etc
Another delegation of Civil Society Tangmarg demanded development of tourism infrastructure in the area, augmentation of health infrastructure, establishment of Mini Secretariat in Tangmarg and other demands of vital public importance.
Hoteliers Association Gulmarg deputation sought special economic package for compensating the loss incurred by them due to lockdown.
Responding to the demand, the Advisor said that a special package would soon be announced in the tourism sector adding that revival of tourism industry has been flagged as foremost priority by the government.
Other delegations, which highlighted their demands and grievances, included MGNREGA Employees Association, PRIs, Pony Wallas, Imambara Management Committee Ahmadpora, labourers delegation, contractors, artisans etc
The Advisor gave a patient hearing and said that Government is taking various initiatives to cater to the developmental needs of the people with special focus on public participation in the process. He said that timely disposal of public grievances and enforcing accountability in the administration is the government’s first priority.
Baseer Khan asked the locals to avail maximum benefits of the welfare schemes and sought their active participation in developmental programmes launched by the government. He further directed the concerned officers to set timelines for completion of incomplete projects, besides prioritizing the local issues like macadamization of roads, augmentation of power infrastructure and provision of drinking water supply.
He also urged the PRIs to play a proactive role in combating COVID-19 pandemic at ground level besides stressed upon them to motivate people for rapid COVID-19 tests. He also advised the people to take all necessary precautions with regard to the containment of COVID-19 pandemic by following all SOPs issued by the government from time to time, besides using face masks and maintaining social distancing.