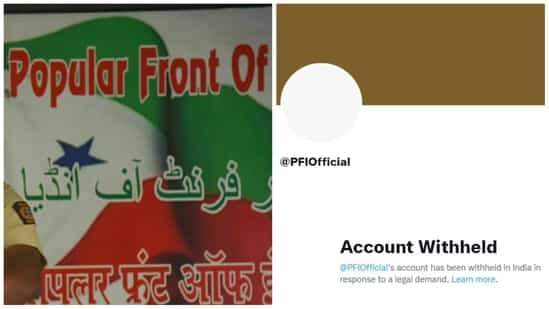 Twitter has ‘withheld’ the official Popular Front of India account a day after the central government banned PFI for a period of five years under the provisions of the Unlawful Activities (Prevention) Act.

Twitter message on the PFI account shows, “@PFIOfficial’s has been withheld in India in response to a legal demand”

The central government on Wednesday banned the PFI for a period of five years in relation to its alleged links with global terror groups and terror funding. It had been under the government’s radar for a while for its alleged role in alleged role in violent protests in different parts of the country.

Ministry of Home Affairs in a statement said, “PFI and its associates or affiliates or fronts have been indulging in unlawful activities, which are prejudicial to the integrity, sovereignty and security of the country and have the potential of disturbing public peace and communal harmony of the country and supporting militancy in the country,”

“And whereas, the central government, having regard to the above circumstances, is of the firm opinion that it is necessary to declare the PFI and its associated or affiliates or fronts as an unlawful association with immediate effect, and accordingly, in exercise of the powers conferred by the proviso to sub-section (3) of section 2 of the said Act, the Central Government hereby directs that this notification shall, subject to any order that may be made under section 4 of the said Act, have effect for a period of five years from the date of its publication in the Official Gazette,” It added

The central government also directed all states and Union Territories to use their power under the UAPA against the PFI and its ‘affiliates’.

Following the decision by the central government, state governments from Kerala and Tamil Nadu have declared PFI and its associates or affiliates or fronts as an unlawful association.