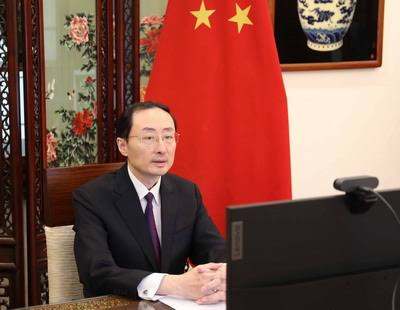 China is seeking greater cooperation with India to achieve a larger and shared goal of building “ Asian Century ,” together, and a senior Chinese diplomat has premised this on reducing the differences , as he asserted that the “ phase of emergency response since the Galwan valley incident has basically come to an end .”

These words were spoken by the Chinese ambassador to India Sun Weidong at a virtual speech to mark the 73rd anniversary of the founding of People’s Republic of China . He also added : “ the ( current border situation ( in eastern Ladakh where Chinese and Indian troops are locked in a tense standoff for the past over 28 months- since April 2020) , is now switching to normalized management and control .”

Before adding more confidence-inspiring words to his thesis of better India-China relations, the Chinese ambassador ‘s reference to the Galwan Valley incident was a signal that how the two countries have moved from a high-point of the conflict to the “ normalized management”.. Galwan Valley incident of June 15/16, 2020 was a nightmarish moment for the two countries , particularly India that had lost 20 of its soldiers , including a Commanding Officer , and dozens others were wounded . This had stirred up the nation and the calls for revenge had gone up across the Indian cities and villages , but the silver-lining was that neither country abandoned the path of dialogue and diplomacy to ease tensions on the borders.

More pertinent was the Ambassador’s emphasis on the dialogue as he detailed in his speech , “ The Chinese side is willing to maintain dialogues via diplomatic and military channels with the Indian side, and together seek solution to the border issues in a peaceful manner through dialogue and consultation..” The catch however was in his next sentence which expected India to “ properly handle issues related to China’s core interests including Taiwan question and Xizang-related issues.”

Weidong also recalled that 34 years ago , Deng Xiaoping made a profound prophecy of an “Asian Century”,” and then went on to substantiate his thesis by saying: “ Recently, Indian External Affairs Minister Dr. Jaishankar also mentioned this concept in many occasions. The “Asian Century” can only be fulfilled through joint development and mutually beneficial cooperation of China and India, as well as through strengthening solidarity and cooperation among China, India and other Asian countries. In this year and next year, a series of multilateral meetings will be held in Asia and we will witness “Asia Moment” in global governance. China and India should uphold the vision of peace, development, autonomy and inclusiveness. We should oppose geopolitical conflicts, bloc confrontation and exclusive “small circles”. We should jointly safeguard stability and prosperity in Asia. The two countries can promote the common values of humanity featuring peace, development, fairness, justice, democracy and freedom on international stage. We can stick to the principle of addressing issues that matter to all through consultation, uphold the legitimate rights and interests of developing countries, oppose hegemony and power politics, push forward building a community with a shared future for mankind. Next year, India will assume the presidency of SCO and G20, and China will support India in its related works together with other member states..”