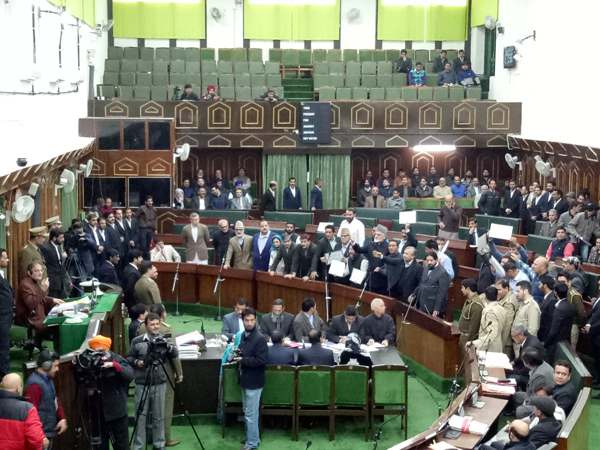 After a   ruckus  at the start of the day’s  proceedings in the Assembly ,  the House decided to have a discussion on the current unrest in Kashmir on Tuesday morning , suspending all the  scheduled business for the day.

Former Chief Minister  Omar Abdullah opened the discussion , for which his party National Conference moved the adjournment motion, Congress and others . He blamed the Mehbooba Mufti led coalition government  for the failure in handling the situation  following the killing of Hizb-ul-Mujahadeen commander Burhan Wani in July  last year .

Before the start of the discussion, the House  witnessed uproarious scenes with BJP  accusing opposition of disrespecting the national anthem   during Governor’s address  to the joint sitting of the two Houses of the state legislature  in the Central hall yesterday .

The opposition  retorted this. They wanted the “ killers of  the youth in Kashmir  to  be brought to book.”

There was exchange of  heated words between the opposition and the treasury  benches  before Speaker called House  to order  and accepted the adjournment motion  for the discussion on the unrest.