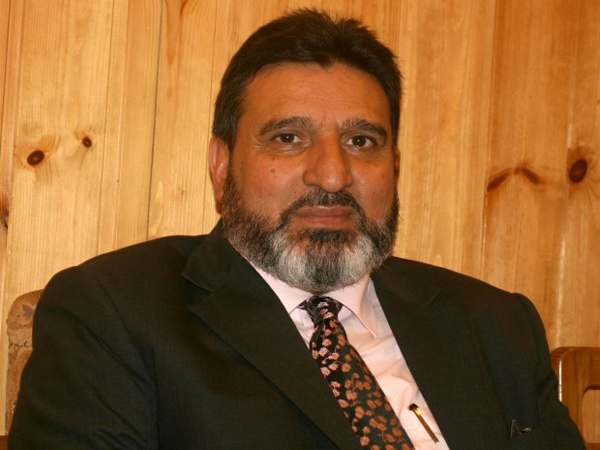 Former minister and MLA Amira Kadal, Syed Mohammad Altaf Bukharion Monday chaired a meeting to review the status of developmental works in progress in his constituency.

Speaking on the occasion, Bukhari directed all the officers to speed up the pace of developmental initiatives in Amirakadal Constituency and called for proper upgradation of existing infrastructure and time-bound implementation of identified welfare programmes.

He directed the officers to be speedy and prompt in completion of the ongoing works so that the public is benefitted.

While reviewing the status of flagship programmes like Tangnar water supply scheme, the MLA Amirakadal directed the officers of PHE department to ensure safe drinking water is supplied in Srinagar especially in his constituency by undertaking proper augmentation of the already existing water supply schemes.

He asked the officers to expedite commissioning of the project so that the habitations dependent on the scheme are benefited at the earliest.

The former minister took stock of drainage works in progress in Amirakadal constituency and reviewed the works taken up by the Srinagar Municipal Corporation sofar.

He sought details of the works taken up for execution in the current financial year and the status of tendering process for the newly identified drainage works including Gangbug and Sumanderbagh.

While reviewing works under PDD sector, the Minister directed the officers to ensure proper augmentation of the electrical infrastructure and supply of power as per schedule in the constituency.

He said that works under schemes like RAPDRP, PM Developmental Package, etc should be implemented in letter and spirit. The meeting was informed about the progress made on creation of various sub stations at different localities in Amirakadal during the current financial year.

While reviewing the healthcare scenario, Bukhari directed the CMO Srinagar to ensure PHCs in Amirakadal constituency work properly to the benefit of locals.

He stressed on making the newly established PHC at Sanatnagar round the clock functional. Bukhari asked the officers of the health department to ensure placement of proper infrastructure and smooth functioning of sub centres at various places including Maisuma and Sanatnagar.

While taking stock of various works being executed by the J&K Housing Board, Bukhari asked the Board officers to accelerate the pace of work in the constituency including beautification of its colonies at Chanapora and Sanatnagar. He also asked the Board for speedy processing of applications received from residents of Amirakadal under Housing for All scheme.

The former minister also asked the deputy commissioner Srinagar to streamline implementation of various centrally sponsored schemes like Ujala, Ujvala and Aadhar so that the people suffering on account of these services are benefitted at an earliest.

He also asked DC Srinagar for speedy completion of community halls in his constituency besides upgradation of dewatering pumps at various places.

While reviewing the supply of ration, Bukhari asked the officers of Food department to ensure smooth supply and proper allocation of ration to all government depots and fair price shops falling in the constituency.

He also asked the department to ensure speedy completion of consumer verifications so that they are issued ration cards in time. He also asked the CAPD officers expedite the process for making newly approved fair price shops across the constituency functional without any further delay.

Taking stock of construction of community halls at various places including Sarai Bala and Barbarshah, the MLA Amirakadal asked the Srinagar Development Authority to expedite the process and start construction of these halls at the already identified locations without any further delay.

Bukhari directed the officers of R&B department to ensure repair of damaged roads and links for better road connectivity in the constituency.