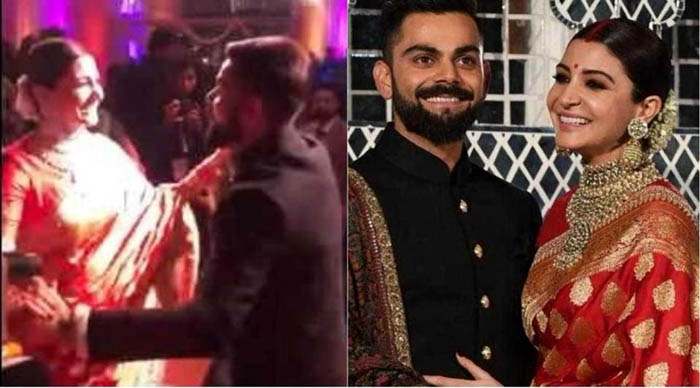 Anushka Sharma and Virat Kohli aren’t done with their post-wedding celebrations as yet. The celebrity duo held a high profile wedding reception in Delhi, which also saw Prime Minister Narendra Modi in attendance. The couple nailed the reception look — Anushka in a red Banarasi sari, sindoor, mogra and uncut diamonds while Virat in a bandgala with a shawl.

Now, a new Instagram video has emerged which shows the couple dancing to the beats of legendary Punjabi singer Gurdas Maan. While Virat is seen dancing, the bride while taking part in the revelry, is lot more mellow but smiling nonetheless. Apparently, it is Virat’s favourite song called Sajna Ve Sajna.

Our favourite video of the night, however, is the one where Anushka shows her moves.

Anushka wore a Sabyasachi ensemble for the grand ceremony and accompanied the look with red bindi, sindoor and mogras. About her saree, the designer revealed in his Instagram post that the ‘Ae Dil Hai Mushkil’ star chose to wear a red Benarasi saree from the by-lanes of Peeli Kohti in Benaras. She summed it all with uncut diamond choker and jhumkas from the designer’s jewellery collection.

Talking about Kohli’s attire, Sabyasachi stated that he is wearing a black textured silk signature bandhgala with the house buttons in 18k gold and a white silk kurta with hand-woven brocade churidaar.

The couple had said in a statement earlier that the Delhi reception would be only for the couple’s relatives and friends, with the wedding reception on 26 December in Mumbai meant for cricket stars and Bollywood celebs. On Wednesday, Virat and Anushka met with PM Narendra Modi to personally invite him and the PM attended the event on Thursday.

India’s cricket star and the Bollywood star tied the knot at a destination wedding in Italy on December 11. The marriage was a pretty hush-hush affair despite months of preparation. Things got revealed only when Anushka and family were photographed at the Mumbai airport leaving with heavy baggage few days before the wedding. Virat, it was later reported, quietly left for Italy with his mother from Delhi.

The couple announced their wedding by posting a picture each on their respective Instagram pages, putting all speculation to rest.

The spectacular Italian wedding was designed by ShaadiSquad, a company owned by wedding planner Devika Narain while the pictures were by celebrated wedding photographer, Joseph Radhik (Stories by Joseph Radhik).

Anushka’s wedding trousseau was the handiwork of renowned fashion designer Sabyasachi Mukherjee — a lehenga chori in pale pink with Rennaissance embroidery in vintage English colours embellished with silver-gold metal thread, pearls and beads – was the talk of the town.

The couple then left for Finland for their honeymoon thereafter. The famous duo was in Rovaniemi, on the Arctic Circle, which is also official hometown of Santa Claus, according to reports.

The couple will now leave for South Africa where the Indian cricket team is playing. After ringing in the New Year with Virat, Anushka will return to finish her film commitments. The actor is working in her home production Pari and in Aanand L Rai’s film with Shah Rukh Khan. She will also start prepping for Sui Dhaaga, her upcoming film with Varun Dhawan.