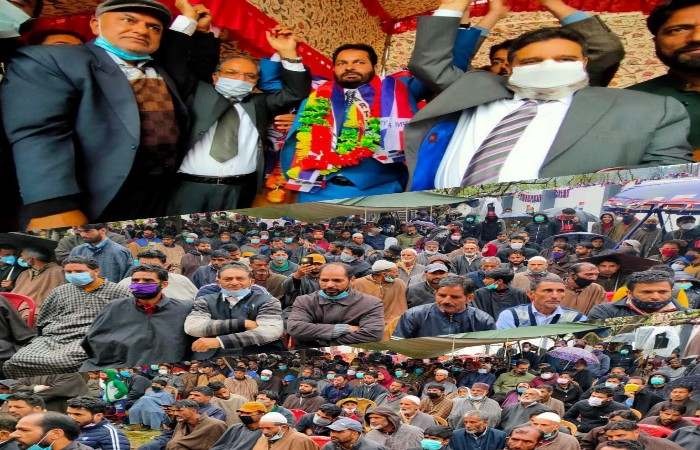 Apni Party President Syed Mohammad Altaf Bukhari on Sunday observed his party signifies a perceptible change in Jammu and Kashmir’s political landscape even though its’ beginning was rooted in the most intricate political circumstances last year.

Addressing a day-long convention held at Bramri-Kupwara in which prominent political activists Mohammad Amin Bhat, Hafizullah Bakhshi along with scores of workers joined Apni Party, Bukhari thanked the people of Jammu and Kashmir for reposing their trust and confidence in Apni Party which has witnessed a considerable rise on account of its unstinted efforts to address the public grievances since last year.

“People of Jammu and Kashmir especially in Kupwara district had given their unflinching support and would blindly trust many political leaders and their Parties in most difficult conditions. But a cursory look at the developmental index of Kupwara district manifests how those leaders have breached the public trust and have utterly failed in their electoral promises sofar,” he remarked.

Bukhari said that Apni Party is committed to truthful politics and will always refrain from emotive and hollow sloganeering. “Our party does not believe in double speak. Since the inception of our party we have called a spade and spade. We don’t believe in ambiguity and have desisted from obscure politics,” he said, while taking a dig on the political parties who had hyphenated restoration of Article 370 & 35-A with the conduct of recently held district development council elections in J&K.

“I will tell you honestly that no elections in Jammu and Kashmir would be referendum on restoration of J&K’s special status and we have always reiterated that abrogation of Articles 370, 35-A can be undone only by two institutions-Parliament or the Supreme Court. In Parliament we don’t have the requisite numbers and regarding Apex Court, we can only hope and pray that its verdict be as per the aspirations of people of J&K,” Bukhari opined.

He said that if Apni Party attains a position wherein it can take the reins of power in future, it will pursue and ensure an equitable development of all the regions and sub regions of Jammu and Kashmir.

“Some political parties promised the moon and the stars to the people of J&K from time to time. From the pre-1953 position, autonomy, independence and now pre August 5, 2019 positions many leaders have innovated different slogans just for their electoral gains. But let me tell you in most lucid terms that the elections in J&K are purely meant for developmental goals and Apni Party will never shy away from speaking this truth to the people, how bitter it may sound,” he remarked.

While welcoming the new entrants, Bukhari said that people admire sincerity and transparency while unfortunately such traits were never adopted by the native political parties in J&K.

“People of J&K were continuously conned by traditional political parties through hollow promises and emotive speeches. The plain example is of District Kupwara, which till now should have become a model-district in regards with progress and development. But alas! All what we have witnessed here is political imperviousness and stark mediocrity,” he remarked.

He also said that the decision for the formation of Apni Party was related with heart and the impulsion came from the prevailing circumstances that arose after August 05, 2019. “The people at that time appeared to be despondent and hopeless. Shops, schools, business firms, transportation- just everything came to a standstill. Some leaders were caged while others opted to remain indoors. This was the time when it dawned on us that we should raise our voice and put in our efforts to give some solace to our people. Thus, Apni Party—the Party of the people—came into existence,” he observed.

Bukhari also stressed that in just one year since its inception Apni Party has achieved much on its commitments and it continues to rigorously follow every single promise made with the people during its genesis.

“As many people are showing faith in our Party’s agenda and it is not far when Statehood will be restored back to us. Those who stand with us on this reliable political platform acknowledge that our Party is devoid of deceit,” he said.

The district Kupwara body members and political workers thanked the Party leadership for visiting Kupwara and also pledged to strengthen the Party at grassroots level.