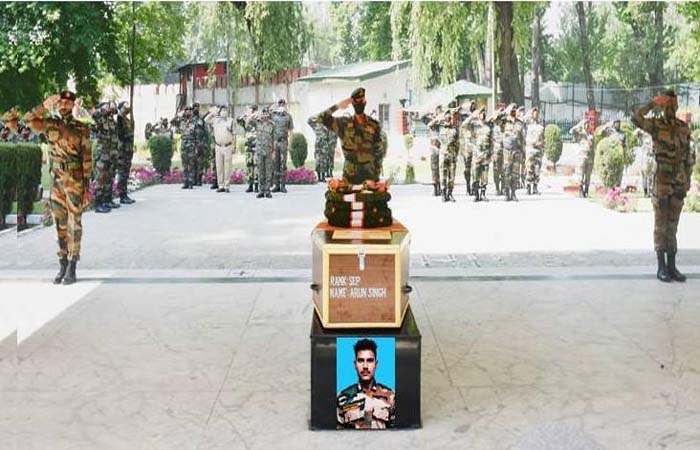 Army today, paid tribute to Sepoy Arun Singh, who made the supreme sacrifice on 04 June 2021 at District Shopian (J&K), in a solemn ceremony at BB Cantt. Maj Gen Anupam Bhagi, Officiating Corps Commander and all ranks paid homage to the gallant soldier on behalf of the proud Nation.

Late Sepoy Arun Singh was on an Area Domination Patrol from Sedhau to Tangimarg, where at 12:30 PM, he slipped and fell into Vishwa river while crossing a wooden bridge at Ada. The soldier was swept downstream due to the fast current of the river before he was finally pulled out by own soldiers and civilians. He was immediately evacuated to Govt Hospital, Mazgam where he was declared dead at 05:15 pm.

Late Sepoy Arun Singh, was 26 years old and had joined the Army in 2016. He belonged to Village Gho Mangni of Pathankot Tehsil, Pathankot District in Punjab and is survived by his father and mother.

The mortal remains of Arun Singh were taken for last rites to his native place, where he would be laid to rest with full military honours. In this hour of grief, the Army stands in solidarity with the bereaved family and remains committed to their dignity and wellbeing.