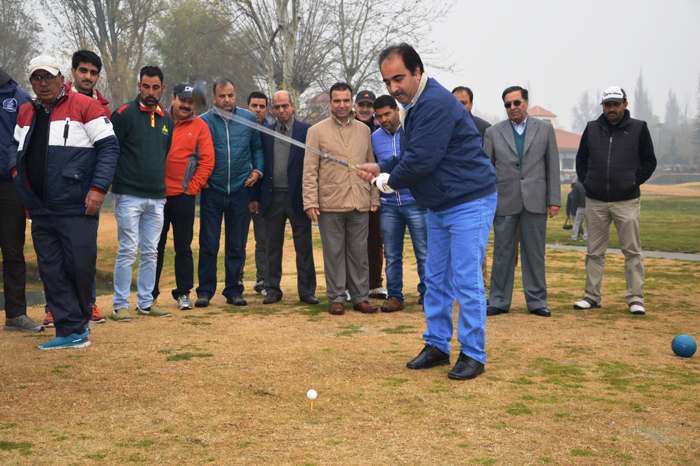 SRINAGAR, NOVEMBER 20: In a bid to promote MICE and Golf in the state, the department of Tourism today organized daylong Autumn Golf Tournament at Royal Springs Golf Course (RSGC), Srinagar.

Besides, golfers from J&K as many as 92 golfers from various parts of the country participated in the tournament.

Speaking on the occasion, Secretary said that late Chief Minister Mufti Muhammad Sayeed had a dream to make the State a golfing paradise where golf lovers from all over the world would throng in large numbers.   He said that State Tourism Department is promoting MICE and Golf as one of the niche segments in the corporate sector in and outside the country.

Shah said that Autumn Golf Tournament was aimed at to establish Jammu and Kashmir as one of the promising destinations for MICE and Golf segments. He said the department is planning to promote conference and Golf tourism as convention and post convention industry.

Dr. Zafar Khanday and Nitin Wazir were declared joint winners of this tournament while as Arshad Qadiri and Farooq Pampori were adjudged as runners up. In Longest Drive category, Manzoor Abbas while as Sheikh Parvez in Straight Drive and Altaf Beigh in Closest Pin categories were the winners.