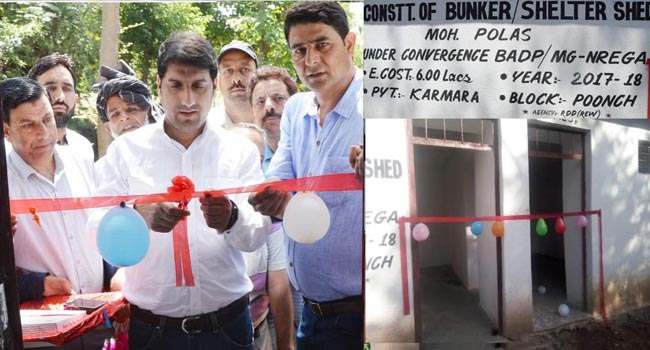 POONCH, JUNE 22: District Development Commissioner, Poonch Mohammad Aijaz Asad handed over 19 community bunkers to the targeted families in border areas and reviewed the progress on the construction of remaining 21 bunkers in different blocks of the district.

In Poonch, the construction of 40 bunkers was finalized by the district administration through Rural Development Department, out of which, 19 were completed for public use in case of exigency. The completed bunkers include five in Poonch block, one in Nangali Sahib Sain Baba, three in Balakote, four in Mandi, three in Mendhar and three in Mankote block. The DDC visited Kharikarmara village along LoC to handover the community bunkers to the public.

Pertinent to mention the district administration has also finalised a plan for construction of another 1,320 individual bunkers and 688 community bunkers to provide safer places to the residents living near the LoC who get affected by the shelling during ceasefire violations.

The DDC directed the executing agency to expedite the pace of works on remaining bunkers so that these can be utilised for the benefit of the people.

He informed the locals that the bunkers have been constructed, keeping in view all the safety measures. Other facilities including lighting, ventilation and sanitation have been taken care of and the design of bunkers was finalized after assessing the degree of threat during shelling across LoC.