BSP pitches for ‘dabang’ Mayawati, says Rahul can’t be PM as his mother is a foreigner 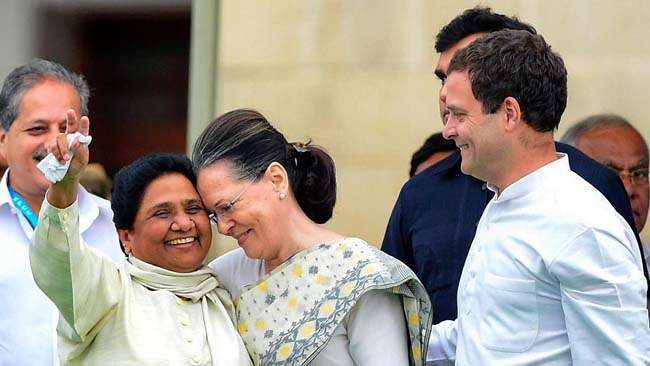 BSP national co-ordinators Vir Singh and Jai Prakash Singh said Mayawati was the only one who could take on Prime Minister Narendra Modi.

The Bahujan Samaj Party (BSP) on Monday projected its president Mayawati as the prime ministerial candidate for next year’s general election, and said that Congress president Rahul Gandhi could not aspire to the post due to “his mother’s foreign origin”.

Addressing the first workers’ conference to discuss the party’s strategy for the Lok Sabha election, BSP national co-ordinators Vir Singh and Jai Prakash Singh said it was “high time that Mayawati became the prime minister of the country”, and that she was the only one who could take on Prime Minister Narendra Modi.

“After playing a pivotal role in making HD Kumaraswamy the chief minister of Karnataka, Mayawati has emerged as a powerful politician. She is the only ‘dabang’ (fearless) leader who can stop the winning chariot of Narendra Modi and Amit Shah in the electoral battle,” Jai Prakash Singh said.

“She is not only a towering Dalit leader but also has the support of all the communities. Time has come when she should be made the PM after the 2019 Lok Sabha election,” he added.

On Gandhi, who is widely believed to be the Congress’s PM face, Singh added: “Rahul looks more like his mother than his father. And his mother is a foreigner, thus he can never be PM”.

“During the oath-taking ceremony of HD Kumaraswamy, the leaders of opposition parties rallied behind Mayawati on the dais. This clearly indicates that she is playing a pivotal role in anti-Modi alliance,” said BSP state unit president RS Kushwaha.