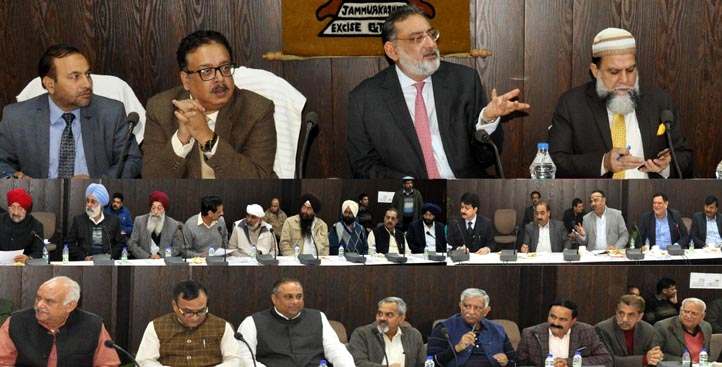 JAMMU, DECEMBER 22: Minister for Finance Haseeb A Drabu today said the government is alive to the problems of people associated with trade, commerce and industry and the State Government is taking all the requisite measures to supplement the biz-friendly environment in the State to expand economic activity.

He said the Goods and Service Tax (GST) regime has provided an opportunity to clean up the system and very soon the desired results would be seen on the ground.

The Minister said this during series of pre-budget consultations with the representations of various business & trade associations and other stakeholders, here today.

The representatives of Press Club Jammu led by its President Ashwani Kumar sought the Government’s support for setting up of a High-Tech Media Centres in the State on the pattern of National Media Centre, New Delhi to meet the growing demands of journalists and to facilitate them.

The PCI delegation also suggested that the government should take a holistic review of existing News Media Empanelment Policy so that it is ensured that the media organizations adhering to the Labour Laws and journalistic welfare only get empaneled for advertisement support from the government. They also asked for incorporating various other important guidelines as listed in the National Media Empanelment and Accreditation Policy.

President, Chamber of Commerce & Industry Jammu Rakesh Gupta called for converting lease agreements to freehold rights for permanent residents of J&K in all industrial estates, Amnesty Scheme for onetime settlement of electricity bills, abolition of negative list for industry, allocation of funds for creation of new Industrial Estates especially for cluster development, redressal of the issue of delayed payments by various government departments, zero rated category for cattle feed manufactured in state, adoption of Disability Act at par with GoI,  one-time Amnesty to waive off interest and penalties during GST and VAT regime upto July 7, 2017.

The Transport Welfare Association also presented various demands before the Finance Minister including withdrawal of increased fees/taxes/penalty imposed by centre/state govt from December 2016, exemption of payment of taxes, Amnesty Scheme for passenger tax, soft loan for replacement of old vehicles on low rate of interest and others.

Drabu informed the Association that the State Financial Corporation is providing finance for transport sector and they can approach the SFC for financing. Responding to the issue of Adda fees being collected from trucks on national highways, the Minister asked the Commissioner Commercial Taxes to look into the issue.

Federation of Industries Jammu led by its Chairman Rattan Dogra demanded conferment of freehold rights on industrial plots to local entrepreneurs. They also raised the issue of not receiving ‘C’ Forms from purchases outside the state after the GST regime. Besides, the Federation also demanded one-time settlement of electricity bills for industrial sector, continuation of Toll Tax on imports & exports, price/purchase preference and others.

The Finance Minister asked the Commissioner CT to take up the issue of ‘C” Form with his counterparts so that the issue is resolved.

Jammu Hotel Restaurant & Bar Association and All Jammu Hotels & Lodges Association while presenting their demands said that besides, getting declared as industry, Hotels & Restaurants are not getting any benefit. They requested for some kind of relief to hotels in Jammu for their survival. Various other demands presented included review of Bar licenses fee, provision of sufficient funds exclusively for publicity of Jammu district, soft loans for repair & renovation of hotel rooms, exemption of GST for hotel industry for further 5 years as was exempted from VAT/Services Tax upto March 2018.

Hotelier Associations also pitched for expediting Mega Projects related to the tourism sector in Jammu besides, dedicated TV Channel for publicity of tourism sector. They also thanked the Minister for Amnesty Scheme announced by the state cabinet on Thursday.

Confederation of Indian Industry (CII) highlighted the concerns of the Industry and requested for levying Toll Tax on Wheat Bran as it is not being used as raw material for manufacturing cattle feed but for sale in local market, creating a holistic environment to promote tourism in Jammu, special focus on Skill Development, interest free loan for training to ITeS units ensuring employment to youth of the state, setting up of small agro parks with common infrastructure facilities and others.

PHD Chamber of Commerce & Industry led by its President Vikrant Kuthiala also shared suggestions regarding rationalization of GST rates and requested for steps to be initiated to broaden the base of Tax Assesses. They urged for simplifying and streamlining the GST System including integration through digital technology.

PHDCCI sought intervention of the Finance Minister in ensuring timely release of government payments to MEME manufacturers, no abolition of Toll Tax at Lakhanpur. Representatives of PHDCCI also suggested that other areas of hospitality industry providing food related services should be brought under 5 % slab.

They also pitched for providing incentives to Tourism Industry as applicable to Industry sector in the state and making J&K State Electricity Regulatory Commission (JKSERC) functional.

Chamber of Traders Federation while sharing their inputs thanked the Finance Minister for introduction of GST in the state and reasonable modifying the GST rates and other relaxations in other provisions involved.

President CTF, Neeraj Anand also thanked the state government for announcing Amnesty Scheme. He presented their demands including quarterly returns in place of monthly returns across all sections of traders, bringing down stationary items and electrical appliances to lower slab, recommendation of bakery products in 5 % and catering services under 5 % as in the case of restaurants.

CTF also raised issues confronting the LoC traders and requested for involving some mechanism to safeguard the investments. They also suggested the Minister to bring ‘Trade Policy’ in consultation with people associated with it.

Drabu while addressing the stakeholders said that Government only can generate revenue if the industry survives and they generate income out of their established units. He further said that there is a need to build our own sustainable investors who can come forward and take the lead.

The Minister assured the participants that he would try to accommodate as many viable suggestions as possible in the budget for meeting the expectation of trade, commerce and industry related people.