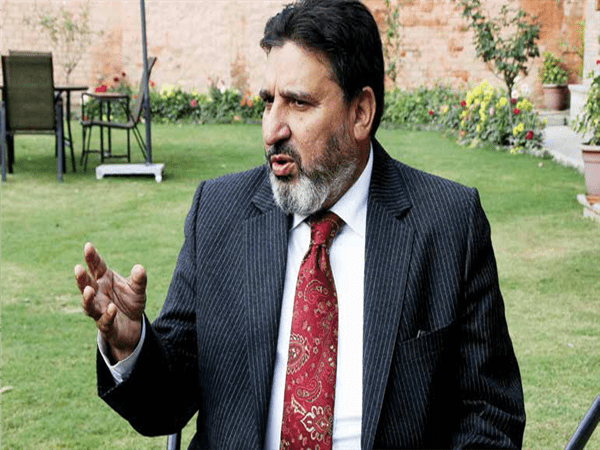 Srinagar, January 18: Former minister and MLA Amirakadal Altaf Bukhari chaired a meeting to review the progress of mechanical dredging aimed at increasing the carrying capacity of river Jhelum and its flood spill channels particularly of those crossing through Amirakadal constituency.

While recalling the horrors of September 2014 deluge, Bukhari observed the people at the helm of affairs cannot behave as mute spectators watching the miseries of people with a thick skin.

“I don’t want to run away like my predecessor who left his electorate to face the wrath of calamity in September 2014. It could have been precedence in the past but the present government is alive to its responsibilities and cannot behave as a mute spectator while watching the imminent dangers,” he remarked.

Expressing serious concern over the tardy progress in mechanical dredging of River Jhelum, the former minister asked the officers to take immediate steps to get the project executed in a time bound manner.

He observed that the people of Srinagar have faced the worst in terms of devastating damages to their lives and properties during the September 2014 deluge and now cannot be left at the mercy of any executing agency that is working as per its own convenience and has sofar shown distressing results.

The former minister stressed on immediate removal of obstacles that have sofar delayed the overall progress in achievement of the de-silting targets chalked out in this critical project.

“The lackadaisical attitude of the company that has been allotted the dredging contract has virtually put the life of the people of Srinagar in jeopardy. The present government is keen to see the timely completion of the project and has also shown her concern in this regard. Now the department must act and get the desired results,” Bukhari stressed on I&FC officers.

He asked the department to get the desired results out of the dredging project taking into consideration the level of devastation caused by the September 2014 floods in Kashmir especially in Srinagar city.

Emphasising on strengthening of embankments of River Jhelum at various places in Amirakadal including Kursoo Rajbagh, Athwajan, Pantha Chowk and Lasjan sides, Bukhari said the department must wake up to the exigencies and take steps for strengthening of the river embankments.

The former minister asked the officer to take immediate steps for strengthening of embankments and carry out dredging of Doodganga Naullah from Lal Nagar Chanapora upto Baghat Barzulla via Rambagh.

Bukhari directed the officer to immediately start the construction work on Check Rawalpora Foot Bridge over spill channel of Doodganga that has already been allotted by the department.

He also asked the officers for construction of both way approaches for foot-bridge at Bank Colony Rawalpora and the protection work involved for prevention of any mishap.

In order to mitigate the sufferings of people on account of constant drinking water shortage in areas in like Saraie Bala, Gonikhan, Sarai Payeen, Hari Singh High Street, Court Road, Abi Guzar and its adjacent areas, the MLA Amirakadal asked the officers of I&FC and PHE to make joint efforts in repair of the flood hit 16 inch water supply pipelines from Zero Bridge upto Amirakadal along the Bund.

Bukhari also asked the officers for formulation of a detailed project report for parapet walling of irrigation canal from Bank Colony Rawalpora upto LD Colony via Astanpora and Old Rawalpora.

The officers were also directed for completion of local drainage at Iqbal Colony Aramwari Bund besides establishment of Park/Jinaz Gah on Bund near Masjid Madina Aramwari.