Modernization of JKP must for capacity building: DGP 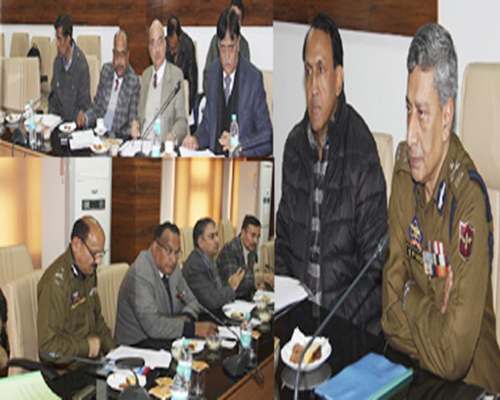 A meeting of 16th Crime and Criminal Tracking Network System Empowered Committee for implementation of CCTNS Project was held at Police Headquarters (PHQ) here today to discuss the present status and progress of the project for implementation in the State.

The high level meeting was chaired by Director General of Police (DGP),  S. P. Vaid was attended by other members of the Committee.

Dr. Vaid at the outset of the meeting, sought details from the members about the progress achieved on different aspects of the project. The meeting was apprised through power point presentation by the members with regard to functioning of different sites in the State. It was informed that 265 sites have been completed and work on other 58 sites is in progress. Data migration and digitization is also in progress to achieve the target.

Meeting discussed the requirements for the sites making them more result oriented. Detailed deliberations were held to implement the project comprehensively and several decisions were taken for its implementation on the ground. Issues with regard to the other stakeholders were also discussed in the meeting.

Vaid, on the occasion said that JKP has turned into an important force in fighting militancy and modernization of the force has become imperative to enhance capacity of the force. In order to make the department high-tech, we are focussing on high security capacity building in future. Special focus is given on technical up-gradation to enhance the capabilities of the force in order to commensurate with the modern requirements, said Vaid.

DGP said that the project is of great importance for the State as it helps in tracking criminal networks and it is imperative to include more modules which could make the project more fruitful in tackling terrorism, human trafficking, drug smuggling and crime mapping. He said that digitization of centres at range level should be accelerated and uninterrupted connectivity at the sites should be ensured by the concerned service providing companies.

During the meeting, DGP asked the supervisory officers to monitor the progress achieved on the project at different levels. He said that the digitization by system integrator of records should be made under the supervision of Domain Experts to avoid errors.