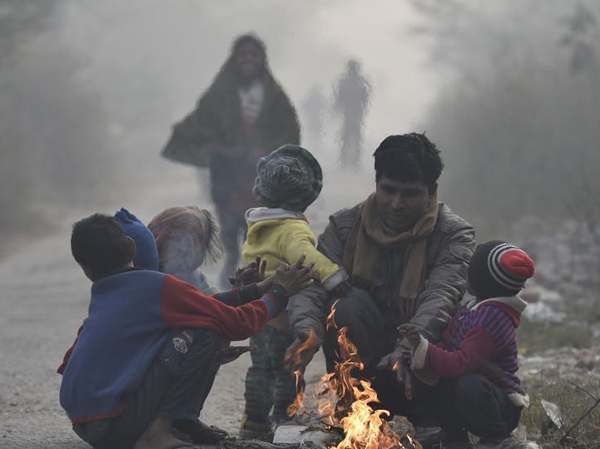 Nine deaths were reported from Uttar Pradesh as a severe cold wave gripped northern India on Saturday with Himachal Pradesh’s Keylong and Jammu and Kashmir’s Kargil registering minus 13.9 and minus 15.6 degrees celsius, respectively, while the national capital recorded its lowest temperature of the season.

According to the weather office, another spell of rain and snowfall was expected both in Himachal Pradesh and Jammu and Kashmir on January 15 and 16.

With this the weatherman has predicted even harsher weather in the next few days as Siberian winds and a western disturbance were expected to bring down the temperatures further.

With the Uttar Pradesh capital registering a dip of more than seven degrees, at least nine deaths were reported from Kannauj and Kanpur rural since Friday, an official said on Saturday.

The Met office said that the mercury would dip steadily till January 19 after which the weather conditions might improve in the state. All schools upto class VIII have been shut down till Monday.

The minimum temperature in Lucknow was recorded at 0.4 degrees celsius, making it the coldest place in the state. The regional Met office said that it was the lowest in several years.

Intense cold wave has gripped the Kashmir Valley as it passes through the 40-day period of harsh cold — ‘Chillai Kalan’ — which began on December 21 and would end on January 30.

All water bodies in the valley were either completely or partially frozen. Gulmarg and Pahalgam recorded minus 14.4 and minus 12 degrees celsius, respectively.

Similar conditions were witnessed in most parts of Himachal Pradesh as prominent tourist towns like Shimla, Narkanda, Kufri, Kalpa, Dalhousie and Manali were likely to experience LIGHT

to moderate spells of snowfall in the coming days.

Delhi on Saturday recorded its lowest temperature of the season with the mercury dipping to 3.2 degrees celsius, four notches below the season’s average, a weather official said.

“The maximum temperature of the day was likely to hover around 20 degrees celsius,” said an official from the India Meteorological Department (IMD).

Friday’s minimum temperature was recorded at 4.3 degrees celsius, which was three notches below the season’s average while on Thursday the mercury dipped to two degrees Celsius at some places here but at the Safdarjung observatory (considered standard for the city), the lowest temperature recorded was at 3.4 degrees celsius.