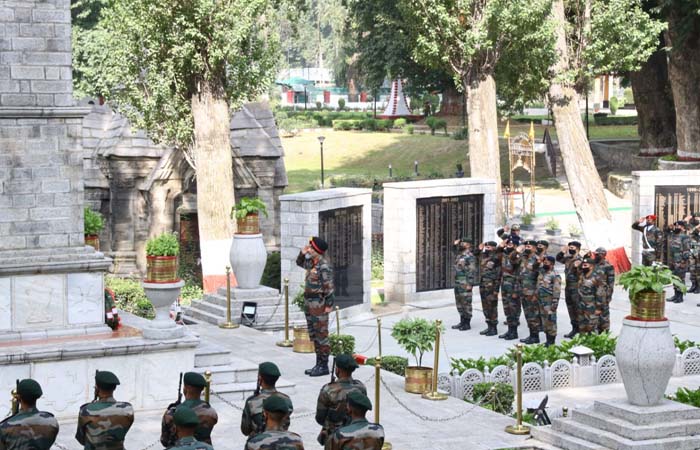 The Kargil Vijay Diwas is celebrated every year to commemorate India’s spectacular victory over Pakistan on this day in 1999. Indian Army launched ‘Operation Vijay’ in May 1999 to evict the Pakistani Army intruders from Kargil heights. Intruders from Northern Light Infantry (Part of Pakistani Regular Army) had treacherously occupied these heights in an attempt to endanger the vital Srinagar-Leh National Highway. After over 60 days of war, the Indian Army with Chinar Corps at the forefront of the battle triumphed over Pakistan Army and chased them out completely from the heights of Dras, Mushkoh, Kaksar and Batalik. Recognising the indomitable courage in the face of enemy, four Param Vir Charkras, nations highest gallantry award along with many others were awarded to the gallant warriors of the Kargil war.

Today, the Nation celebrates 23 years of this glorious victory. The Chinar Corps on this historic day remembers the 527 gallant soldiers who made the supreme sacrifice. We also salute the serving soldiers and veterans who took part in the tough battle at treacherous heights along the Line of Control. Lt Gen ADS Aujla, GOC Chinar Corps on behalf of all ranks of the Corps paid homage to the Kargil War heroes in a solemn ceremony held at the War Memorial in Badami Bagh Cantonment, Srinagar. The proceedings included brief narration of the Kargil War highlighting the saga of courage and valour of the martyrs, prayers by religious teachers and laying of wreath in proud remembrance of the valiant heroes who participated in the operations.