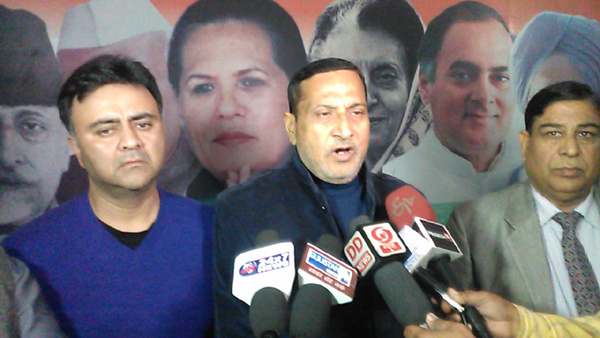 Jammu and Kashmir unit  of Congress Tuesday  sought sacking  of two BJP ministers as also action under law against them for their neck deep corruption .

“ It is the duty of the Chief Minister  to take cognizance of the reports that have appeared in media pointing to charges of corruption and accumulation of cash  by two BJP ministers,” said  senior Vice President Sham Lal Sharma  at a press conference Tuesday evening . He was referring to the media reports suggesting corruption charges against two BJP ministers .

Sham Lal and other leaders of the Congress party including Vikram Malhotra and Anil Chopra questioned the “silence of BJP and Chief Minister Mehbooba Mufti over serious allegations appeared in the section of press today about the alleged involvement  of two ministers in illegal and corrupt practices and demanded that  Chief Minister should immediately take action and sack them from the cabinet and proceed against them in accordance with Law.”

They  also questioned the Modi Ji Slogan of “Na Khaenge- Na Khane Deinge” and said that time has come for him and his party to translate words into action immediately   Sham Lal Sharma said that “the transfer industry and all sorts of irregularities and illegalities are being reported including land encroachments by  some Ministers of the coalition Govt., but the Modi Ji Slogan has turned out to be a “Jumla” only and the PDP-BJP Govt. fight against corruption is a mere slogan. “

He said it is very strange that police has reportedly   handed over to the income tax department, two women carrying some cash of the time of around Rs. 2.80 lac, in the scrapped currency denominations ,while “cash running into crores of Rupees allegedly belonging to a BJP Minister was noticed by police but the case is being hushed up, which is a very serious matter and two yardsticks cannot be applied in the same matter and law should take its own course and the culprits should be exposed and booked .”

He also referred to another media report carrying serious allegations of corruption in a deal involving a BJP Minister and an MLC of the party . The Chief Minister and the BJP High command should immediately take action against the guilty failing which Congress would take to streets if no action is taken against those found involved in the loot and corruption in the Government.